Should 'Spree' Always Be Fun?

The AP Stylebook, a manual used by newspaper writers and editors, has a Twitter account where they offer usage advice. One tweet inspired a bit of editorial backlash from some:

AP Style tip: The word spree usually is applied to shopping or revelry. Do not use in other circumstances: killing spree. 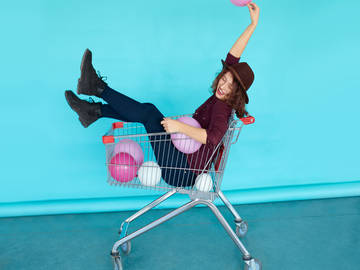 Some think 'spree' should only be used to describe fun, lighthearted activities—e.g., "a shopping spree." These people object to more sinister phrases like "crime spree" and "killing spree." But 'spree' has been used to mean "a drinking binge" for almost as long as the word has existed, and we have examples of 'spree' being used to describe crimes since the early 19th century.

Some people complained. Why should you avoid spree when it refers to anything other than shopping or revelry? Others noted that it might provide a useful distinction in reporting:

@APStylebook It *is* used to describe type of crime, i.e., 'spree killer,' to distinguish from 'mass' and 'serial.' @ryanmhandy

And yet, the AP Stylebook forbids the use of spree paired with any crime—though our files show that crime-related sprees are almost just as common in modern use as the shopping and spending sprees. What's wrong with the more sinister uses of spree?

Our earliest recorded uses for spree come from the early 1800s, where it referred first to a lively and excessive outburst of activity. Playful boisterousness was the order of the day: early citations mention "ranting sprees" or place the word spree in the context of sporting (hunting and shooting). The argument that critics of the sinister spree make is that the word's original meaning—and indeed, most of its historical meaning—refers to fun. The use of spree paired with killing or shooting is a mismatch: a fun word used to describe a horrific event.

But the claim that it's a crime against the word's original and most common uses to pair spree with crimes is wrong. The true nature of the early sprees was revealed in a very early dictionary entry for the word:

Spree came to refer to a drinking binge almost as soon as the word made it into print. The wild abandon and sketchy loss of control that this sense of spree connotes led to yet another sinister use of spree:

For what were you sent here?—A Spree.
For Burglary?—Yes, Burglary.
—Report from the Select Committee of the House of Lords Appointed to Inquire Into the Present State of the Several Gaols and Houses of Correction in England and Wales, 1835

From the mid-1800s onward, spree has indeed been associated with crime. Both killing spree and shooting spree come into print around the same time the shopping spree does. The unmodified spree also referred more frequently to a drinking binge than it did to innocent revelry; today, the unmodified spree is used just as often to refer to bad events (like killings, shooting, bombings, and crime) as it is to refer to good or neutral events (like shopping, spending, and "mutual toe-nail painting," as one of our citations puts it).

So should you use spree to refer to a series of crimes? That is up to you. It's not bad advice to say that some people may think that crime spree implies that crime is fun, so you should carefully weigh your words when writing about the sinister. But if you choose to leave spree out of your writing, you cannot make that decision on the grounds that spree has always referred only to harmless, innocent fun.