Spitting image ("someone who looks very much like someone else") has many origin stories. Before you read any further, however, you should consider yourself forewarned that this article will not attempt to claim to have proved with certainty the trustworthiness of any of them. If you would seek certainty in life, go read the scores for yesterday’s sports games. If you would embrace the messy and chaotic uncertainty of language, then read on. 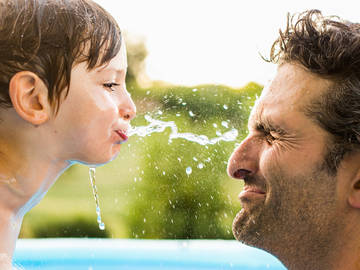 'Spit' was historically used to mean "perfect likeness," possibly because it was said that a child looked enough like a parent to have been spit out of the parent's mouth. There are, however, other theories.

Before we had spitting image there was another version of this unsavory-sounding expression, which was spitten image. Spitten is believed to be a corruption of the words “spit and,” as spit formerly had the meaning of “perfect likeness.” There is evidence of spit being used in this fashion from the early 19th century:

Meanwhile the defeated lawyer with his fair one had secretly fled to private furnished lodgings, at the house of Mr. Thomas Prior … where she was brought to bed of a daughter, his acknowledged child, but according to the report of the nurse, “the very spit of the old Captain.”
—The New Newgate Calendar, 1810

I saw a dead snake tother day—its (sic) a monstrous ugly beast, Pat--Did you ever see that one among the curiosities at Derry? Ogh! It is the very spit of it--only a great deal bigger every way….
—The Philadephia Gazette, 26 Jun., 1816

By the middle of the 19th century we begin to see evidence of the words spit and image used in conjunction.

The nurse and her sister then retire up the stage, and confer a while in dumb show; after which they approach the crib of the infant Pidgeon, the nurse turns down the cover, and at a sight of the infant, the sister clasps her hands together and energetically exclaims, “Oh, it’s the very spit and image of my own baby! as like my little baby as two peas!”
—Horatio Newton Moore, Fitzgerald and Hopkins: Or, Scenes and Adventures in Theatrical Life, 1847

Spitten image followed spit and image, and finally spitting image began to see use at the end of the 19th century. The initial reason given for why we should have used spit in this manner is that it was said of a child that he or she looked enough like a parent to have been spit out of their mouth. Spit has been so used since at least the late 16th century.

…as like the papists, as if they had beene spit out of their mouthes.
—William Charke, An Answeare for the Time…., 1583

So it would appear that the metaphor of spitting something out of one’s mouth gradually shifted to become the very spit of (something), which then turned into spit and image, which in turn became spitten image and settled on spitting image. Is the matter settled? No, of course not.

The above theory is the most likely one, but tracing a dialectical expression that has changed its form multiple times over hundreds of years leaves room for all sorts of alternate theories. Some of these are that spitting image comes from the words spirit and image (which itself may come from 19th century African-American usage, Benjamin Franklin, or any one of a number of other sources); that it was borrowed from a similar French expression; or that the spit in question may be a Biblical reference to another bodily fluid.

What of splitting image? Is there any chance that this version, in which a thing is split in two, thus providing an exact likeness, is the origin of the expression? It seems quite unlikely. This common variant (some might unkindly refer to it as a mistake), does not crop up until well into the 20th century.

All Louise’s friends tell her she is the living splitting image of one of the Gish sisters—which one, they don’t quite remember.
—The Evening Star (Washington, DC), 10 May, 1925

The younger Colman, who is said to be a splitting image of Ronnie, is a radio commentator.
—Dan Thomas, The Santa Ana Register (Santa Ana, CA), 28 Jun., 1935

It is easy to dismiss splitting image as a mistake, and dictionaries do not enter it as a headword (although this may have as much to do with its relative paucity of use as with its lack of correctness). Yet when one considers the myriad forms that this expression has taken over the centuries, and the fact that each new version could rightfully be considered a mistake, it is difficult to say that splitting image will not one day have its moment in the sun, and be considered every bit as proper as spitten image, spit and image, or any of the others.