The act itself is familiar to anyone who's ever watched comedy: One character takes a swig or bite of something just as another character says or does something shocking or outrageous, causing the first character to spew out the contents of his or her mouth. It's called a spit take. 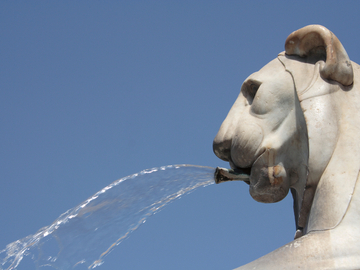 'Spit take' originated as a showbiz term, but it's increasingly seen in general contexts.

The spit take goes back at least as far as vaudeville, but it's commonly associated with Danny Thomas, the 20th century comedian who is often credited with making it famous. In some circles it's in fact referred to as the "Danny Thomas spit take."

Originally called a spit gag, the word spit take itself (also styled as spit-take and in some contexts as spittake) looks, according to preliminary research, to date to the early 20th century, but it mostly existed in the realm of showbiz vernacular until this century.

Now, though, you're likely to encounter it in general contexts:

The origin of the "spit" part of the term is obvious, but the "take" part is a little opaque. It's the sense of take defined in this dictionary as "a visible response or reaction (as to something unexpected)," as in "a delayed take."

This is the same sense of take in the term double take: "a delayed reaction to a surprising or significant situation after an initial failure to notice anything unusual."

While double take has not expanded much beyond its original use (and literal meaning), though, spit take has been making all kinds of moves.

We now see figurative use:

And among the most adept satirists of contemporary popular culture is the team of Andy Samberg, Akiva Schaffer and Jorma Taccone…. Their latest, “Popstar: Never Stop Never Stopping,” is a spit-take on the world of contemporary pop music and celebrity, in which Samberg stars as a duly dull singer reuniting with his former bandmates. — Mark Olsen, The Los Angeles Times, 3 June 2016

And it's a common interjection on social media sites like Twitter, where it's often preceded by a hashtag or placed in brackets or between asterisks:

There's also evidence of spit take in use as a verb:

On the morning of May 12, LinkedIn … emailed scores of my contacts and told them I’m a professional racist. It was one of those updates that LinkedIn regularly sends its users, algorithmically assembled missives about their connections’ appearances in the media…. This surely caused a few of my professional acquaintances to spit-take. — Will Johnson, Slate, 24 May 2016

The conjugation of that verb may be a significant hurdle to full adoption, though—at least in the past tense form. We see evidence of both "spit taked" and "spit took"; neither seems easy to swallow, but the former seems at this point to be the preferred form:

Larissa spit-taked her oolong tea then laid her head on the table in a summer storm of giggles. — Bruce Wagner, I Met Someone, 2016

This is the pattern that double take follows in the occasional cases in which it's used as a verb:

Later truck-drivers honked their horns and passers-by double-taked as Mrs Cameron led her group of fashionable walkers through the streets of Whitehall to Somerset House. — Luke Leitch, The Telegraph (London), 6 Sept. 2011

In the meanwhile, constructions like "made me spit take" avoid the issue and are much more common.

Using the noun in the phrase "do a spit take," however, continues to be the most common method of employment, and it's the noun that is most likely to be considered for entry in the near future.