Where does the term 'spinster' come from?

A single woman who is old enough to be married but isn't—and isn't likely to get married—is sometimes called a spinster. The word has an old-fashioned and dated feel to it, and because of that it can carry a whiff of impoliteness in certain circumstances. But in previous centuries, spinster was a valuable word that didn't carry any such connotation. 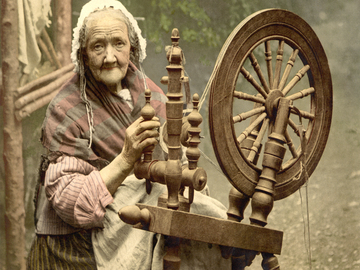 When spinster first entered English in the mid-1300s, it referred to a woman who spun thread and yarn. Our earliest use comes from the allegorical poem Piers Plowman: "And my wyf ... Spak to þe spinsters for to spinne hit softe" (and my wife...spoke to the spinners to spin it soft).

Two historical facts led to spinster's evolution: the fact that most spinners in the Middle Ages were women, and the fact that it was common in legal documents to use one's occupation as a sort of surname (which is why we have Smiths and Bakers and Tanners and so on). Women who spun yarn or thread were given the title Spinster in legal documents.

The jump from spinner to single lady is likely an economic one. Some scholars suggest that during the late Middle Ages, married tradeswomen had greater access to raw materials and the market (through their husbands) than unmarried woman did, and therefore unmarried women ended up with lower-status, lower-income jobs like combing, carding, and spinning wool. These jobs didn't require access to expensive tools like looms, and could be done at home. By the 17th century, spinster was being used in legal documents to refer to unmarried women.

The -ster in spinster sounds modern to our ears—and maybe we can thank hipster for that—but it goes back almost 1000 years.