Speculate has taken quite the semantic journey; it started as a verb meaning “to look at,” then picked up “to contemplate,” and finally made the leap to “to imagine that a profit can be made” or the act of pondering the likelihood of success. Speculate and many other English words that descend from the Latin verb specere (“to look”) have meanings connected to vision or the act of watching. In the historical development of speculate, the connection to vision is clear: one might “look at” an investment and “contemplate” its likelihood of success.

We know that spectacles help us to see, and spectators are the people who watch, well, spectacles.

So it’s clear that most of the English words that descend from the Latin verb meaning “to look” or “to look at,” specere, have a meaning that is connected, unsurprisingly, to vision or the act of watching. 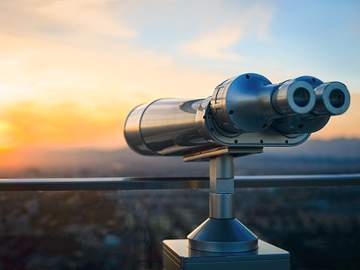 See where we're going with all this?

What’s intriguing about this family of word-cousins is the, ahem, spectrum (“range of things that can be seen”) of meanings connected to vision or seeing or watching or looking. This first grouping (spectacle, spectator) is fairly literal, “something to see” or “helping to see” or “one that is seeing.” A now obsolete word in this category is spectable, meaning, simply, “visible.”

Words Connected With The Idea of “Looking”

Another grouping of these words embeds the idea of “looking” into their meanings. Some of them reveal etymologies that are hiding in (pardon the pun) plain sight:

inspect (“to look into, to examine”)

respect (“to look back, to take notice of, to show regard for”)

aspect (“something that is looked at”)

suspect (“to look up at, to look secretly at”)

expect (“to look outward, to look forward to, to hope for”)

A family resemblance to these words is also easy to see in the next grouping:

perspective (“a view forward, a view into the distance”)

introspection (“a look into”)

circumspect (“looking around, being cautious”)

We think of Latin as the source of super-specific and technical scientific vocabulary, but the actual origin of one of the best-known of such terms also clearly shows us a pre-modern understanding of scientific principles:

specimen (“the way something looks”)

Are 'Specimen' and 'Species' Related?

The word specimen in Latin moved from “appearance” (“how a thing looks”) to “model or pattern for others,” beginning its semantic journey to its modern technical sense in English. But species, as a term for identifying one biological group compared to another, amounts to “what it looks like” as opposed to more modern criteria such as DNA and evolutionary observations. In this case, the term evolved into its modern meaning in step with its scientific use.

But wait, there’s more, including the obvious:

conspicuous (“visible with, able to be seen, obvious”)

perspicacious (“able to see through, perceptive”)

The History and Journey of 'Speculate'

Moving from literal meanings of vision (spectator, “one that sees”) and looking (inspect, “to look into”) to the figurative “looking” that we do in thought (introspection, circumspect) to projecting ideas upon what it is that we see (species, “what something looks like”), we come to one last expansion of the meaning of the original Latin term specere with speculate.

Originally, speculate had a literal meaning that makes its etymological connection obvious, but is now obsolete in English: “to look at.” It also had a figurative use as a synonym of “to contemplate,” which was the first definition given by Noah Webster in his dictionary of 1828:

This use is familiar to us today, as in “We can only speculate as to why he chose that suit.”

The next development of the word’s use, meaning “to assume a business risk in hope of gain,” is a fascinating case study in the evolution of vocabulary. Speculate started out meaning “to look at,” then progressed to “to contemplate,” and, finally, it made the jump from “looking” to “thinking” to “imagining that a profit can be made.” Financial speculation requires both knowledge and imagination, so the figurative use of “seeing,” in this case, involves “looking” at the investment in question and “contemplating” its likelihood of success. This evolution took place over about 250 years, according to the Oxford English Dictionary, and the first recorded use of the “financial” use of speculate was made by Thomas Jefferson, so it’s possible that this use is an Americanism.

Noah Webster, who knew Jefferson personally (and disagreed with him politically), placed this new use in his 1828 edition. It was still a relatively new usage, but clearly it was in the air, and Webster recorded it:

In commerce, to purchase land, goods, stock or other things, with the expectation of an advance in price, and of selling the articles with a profit by means of such advance; as, to speculate in coffee, or in sugar, or in six percent stock, or in bank stock.

From seeing with your own eyes to imagining a remunerative investment, one might say that this word’s evolution illustrates what takes place when one is looking at the specter of success.