A serious look at where it came from

One of the difficulties in the creation and upkeep of a dictionary is the issue of how to treat nonstandard language. English is constantly being refreshed with new slang words, some of which quickly wither and disappear, while others assimilate into the language and become standardized (our 1916 Collegiate listed awful, jinx, and measly as slang). Should the lexicographer enter every new slang term that comes along the dictionary would quickly become overloaded with words which have little current applicability; if too long passes before entering some of these words the dictionary is obsolete before it is published.

The compromise is to enter words after they have demonstrated a certain breadth and consistency of use, typically in printed form. A fine example of the kind of word that merits inclusion is asshat (“a stupid, annoying, or detestable person”), a word recently added to our dictionary. It occupies the space between assez and asshead. 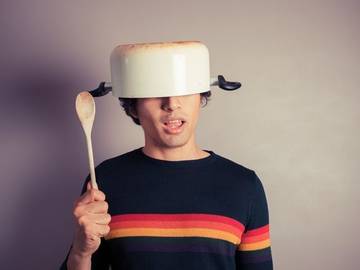 It's traveled pretty far into the language in just a short amount of time.

Asshat is a new addition to the English language. Recent research has found evidence of use from the late 1990s, in Usenet groups. (Note: the first citation below may be a pun on the misspelling of musical group Hatebreed)

who are hatbreed? maybe it's part of that ass hat crew selena hangs out with
— alt.music.hardcore, 14 Apr. 1998

The use of this word has, over the past two decades, spread considerably, and it may now be found even among the most urbane and sophisticated speakers of English; the following citation is taken from a recent interview with the editor in chief of The American Heritage Dictionary:

In the case of pronoun usage, it really comes down to: Are you being a nice person or an asshat?”
— Steve Kleinedler (interviewed by Sarah Grey), Conscious Style Guide (consciousstyleguide.com), “Conscious Language in the American Heritage Dictionary,” 22 Feb. 2018

As asshat steadied itself and found its legs, it took on a slightly elongated form: asshattery (extremely provisional definition: “the condition and practices of an asshat”). This word appears to have begun being used in the early 2000s, initially only in online writing. It also may now be found in a wide range of locations, linguistic registers, and media.

I really like the twins now, especially since they've been > so gracious in the face of the "Alliance"'s asshattery.
— alt.tv.amazing-race, 18 Oct. 2002

For some time I have truly, passionately and intensely believed that Scott and Kourtney were in love, because whenever Scott came in from some screeching, gold-plated, Gordon Gekko asshattery, Kourtney furiously said nothing.
— Camilla Long, The Sunday Times, (London, Eng.), 19 Jul. 2015

Asshead, in stark contrast to asshat, has a long history in our language; our records show continual appearances since at least 1541, when Thomas Becon made the first of what was to be numerous uses of the word.

They thynke it a hundreth yeare, yf he preachethe but halfe an houre, so litle pleasure haue these asse heades in hearynge the gloryous & blessed word of god.
— Thomas Becon, Newes Out of Heauen both Pleasaunt and Joyfull, 1541

If we have been calling people assheads for almost 500 years now, why did it take so long for ass and hat to get together in similarly pejorative fashion? One reason may be that while ass lends itself well to the beginning of an opprobrious compound, hat leaves something to be desired in terms of mordant wit (the etymological note we have describes the linking of ass and hat as “seemingly nonsensical”).

It should be noted that, in addition to gracing the initial portion of many compounds, ass can also function as an infix (inserted within a word, or linking two words, typically as an intensifier, such as ‘grown-ass man’) or as a suffix (badass). These functions are thought to have originated with African American vernacular in the mid-20th century, and are distinct from the role of ass in asshat and asshattery.

This is disputed by Van Peebles, who is evidently willing to try his luck in this type of black enterprise. He has underwritten the cost of his upcoming film “Sweetback’s Bad Ass Song,” made by a crew which is 50 per cent black and Puerto Rican.
— Los Angeles Sentinel, 6 Aug. 1970

Asshat may not be the first word you draw from your quiver when seeking to adequately describe someone for whom you feel some measure of distaste. It’s fine by us if you choose not to use the word, but given its status in our language we would be remiss in our duties if we failed to provide it with a definition.

A final note: careful writers would do well to take care with the correct use of the hyphen and spacing when employing the suffix form of -ass. There is a profound difference between being in possession of a “sweet-ass hat” and a “sweet asshat”; failure to observe these conventions of punctuation may result in significant confusion on the part of your readers.