Sneaked or Snuck: Which Is Correct?

It's a modern English mystery: not so very long ago, a new past tense form of a fairly common verb snuck – or is it sneaked? – into the English language. And no one really knows how or why. 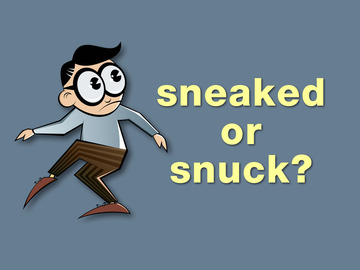 Sneaked vs. Snuck in History

Sneak had the past tense form sneaked when it first appeared in the late 1500s, but about 300 years later, in the late 1800s, the form snuck started showing up in the United States. To appreciate how odd this is we should recap the two basic English verb categories. Those that take the familiar -ed for their past tense and past-participle forms – for example, play: They played chess yesterday and They have played daily for years – are called "regular" verbs. They follow the rules and constitute the great majority of English verbs. The other not-so-predictable verbs are "irregular." They follow long-abandoned logic and confuse anyone who pays attention to them: am becomes was becomes been??

Both regular and irregular verbs date back to Old English, but over the centuries most verbs that had been irregular developed regular forms, eventually leaving only the most common of the irregular verbs – among them be, do, say, go, take, and get – with their quirky conjugations.

But sneak bucks the trend. Over the past 120-odd years snuck has become by some estimations the more common past tense form in the US. Some people object to the sneaky upstart – especially speakers of British English – but it appears regularly and without commentary in respected publications on both sides of the pond.

Perhaps the most mysterious part of the story of snuck is the question of where it came from. No common verb follows the precise pattern of snuck: the past tense of leak is not luck, of streak is not struck, of creak is not cruck, of peek is not puck. It's as if snuck just sidled on in and made itself at home in the language, and most of us took it for a native. Pretty sneaky.