Why Were Shoemakers 'Snobs'?

The word wasn't always so hifalutin.

People love facts. Especially those of the small and neat variety, which present a minor and triumphant bit of knowledge with a hint of seeming incongruity. You know, the kind you can pull out of your pocket at a dinner party and score a guaranteed hit over cocktails. Unfortunately, this is the sort of fact that often finds itself paired with a spurious etymology. A fine example of this is the claim made about the word snob:

The word ‘snob’ is said to have arisen from the custom of writing “s. nob.”, that is, ‘sine nobilitate,’ after the names of children of untitled parents in certain English schools.
— Norman DeWitt, The Classical Weekly (Pittsburgh, PA), 1 Oct. 1941 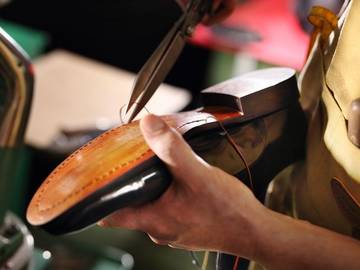 In the early 19th century it meant “a person not belonging to the upper classes; one not an aristocrat.”

The author of the above citation hedges his bets, only going so far as to claim “it is said,” rather than making a stronger declaration. We must inform you, however, that if this is the charming etymological fact you’ve been using like an amuse-bouche at dinner parties, you should find a different one, as the word snob does not come from sine nobilitate.

Sine nobilitate means “without nobility,” which makes it feel as though it could be the origin for snob. The only problem with this is that the various senses of snob which are concerned with social class and suchlike were not the first meanings of this word. When snob first began to be found in print, it was used as a term for a shoemaker, or cobbler.

…But alack a day, the unfortunate snob had entirely forgot the use of his tools while the money lasted; which heaven knows was not very long….
— The Female Porter of Shoreditch, c1750

Her love Snob thought firm as lump butter,
That the breath of her lips were as fresh,
And said things no cobler could utter,
As he press’d the doe-skin of her flesh.
— A New Song Called the Village Crim. Con. Or, Snob versus Snip, c1750

But the last of the Cobler is said to relate,
There’s an end of the poor Snob, but no end of his fate
No Mortal came near him, no Shroud could he have,
No Coffin prepar’d nor no care for a Grave.
— The Vocal Medley, or, Universal Songster, 1755

The Snob, and the Taylor,
The Seamstress, and Weaver,
The Butcher, the Baker,
Brewer, Scullion and Waiter.
— ‘Cincinnatus,’ The Patriotic Mirror, 1781

Epitaph on a Cobler.
Here lies poor Bob,
An honest snob,
Who us’d to doctor Christians’ souls;
Grim death, alack,
Gave him a thwack,
Which cast his thread, and broke his awls.
— The Western Country Magazine (Salisbury, Eng.), Jan. 1790

No one knows why we used to call shoemakers snobs, although it seems fairly clear that this meaning was the first one intended by this word, beginning in the early to mid-18th century. The Oxford English Dictionary has evidence indicating that the word was next used in Cambridge University slang by the end of that century, to refer to a denizen of the town, rather than of the college.

By the 1830s snob had taken on meanings that were directly related to class, but not in the way that we use it today. This early 19th century sense was “a person not belonging to the upper classes; one not an aristocrat.” In the middle 19th century the word took on the meaning of “one who blatantly imitates, fawningly admires, or vulgarly seeks association with those he regards as his superiors.”

He who meanly admires mean things is a Snob—perhaps that is a safe definition of the character.
— William Makepeace Thackeray, The Book of Snobs, 1848

I’ll teach you how to behave to your superiors, you condescending snob of an aristocrat.
— Maude Howe, ”Phillida,” in The Ladies’ Home Journal (Philadelphia, PA), May 1890

Finally, by the beginning of the 20th century snob had come to be used to mean “one who tends to rebuff the advances of those he regards as inferior; one inclined to social exclusiveness.”

He was in trade, he said, and was proud of it. He was an American through and through, and there was not an inch of the snob about him.
— The Nashville American (Nashville, TN), 11 Jan. 1901

And I had never been a snob about birth or position or money or even intellect, perhaps not even about breeding. I have always had friendly relations with tradespeople and servants.
— Abby Meguire Roach, The Louisville Courier-Journal (Louisville, KY), 28 Dec. 1919

If you can transform that story of snob into the sort of anecdote that crushes in polite company, more power to you. Or you could look for an etymological anecdote which has not yet been debunked; there are a few of them out there still.

MORE TO EXPLORE: 10 Words to Call the Snobs and Elitists in Your Life