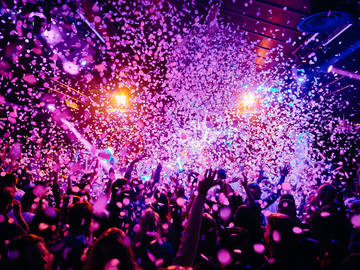 A smash hit brings the crowd to their feet.

The words share similar etymological trajectories too, despite hit being older by several centuries. Both begin in violence and have both verb and noun use: hit went from being a verb about sudden blows and quick forceful contact to (centuries on) being a noun referring to an act of striking or forcefully coming in contact with someone or something; smash (which is probably a blend of smack and mash) went from being an early 18th century noun referring to a violent blow to, a few decades later, being a verb about breaking or crushing by violence.

So how did we get to grand success? Well, behind the acts of violence typically involved where hit and smash are employed we often find intent, and when the hit lands or the smash crushes there is indeed a kind of success. Not surprisingly, along the path from violence to success, both words ventured into the controlled and civil violence that is sport. Hits and smashes can send balls flying, and the crowd goes wild.

And that brings us precisely to where we first encounter the phrase smash hit: on the baseball field. The first smash hits were line drives, the batted ball zooming along in a straight line, not far above the ground:

McGinnity pitched the other two innings and Hannifan, batting for Tuckey in the eighth inning, sent a smash hit to deep left center for a home run, the single score for Boston.
—The Idaho Statesman (Boise, Idaho), 6 Oct. 1908

Every other smash hit by the Bees was a line drive directly at some fielder.
—The Salt Lake Telegram (Salt Lake City, UT), 19 Mar. 1915

It wasn't long after the introduction of the phrase via baseball that the entertainment industry adopted it for its very own:

The woman is of a type very pleasing and makes a splendid foil to the man’s comedy, as a drunk. The act went over for a smash hit, and was worthy of all it got.
—Variety, 4 Feb. 1921

You have only Two Days left in which to see the smash hit of the year; the crowning Triumph of the Motion Picture. Douglas Fairbanks in Alexander Dumas’ ‘The Three Musketeers’
— (advt) The Morning Star (Rockford, IL), 21 Oct. 1921

Smash hit is still most at home in the entertainment world. Anything that large audiences love can get the designation. Fortunately, no one gets hurt (most of the time).