‘Sleight’ or ‘Slight’ of Hand?

Watch closely and be amazed.

The word sleight means "deceitful craftiness" or "dexterity and skill." Slight means "having a slim or delicate build" or "small of its kind or in amount." When talking about cleverly executed tricks, the phrase you want is sleight of hand.

Are you paying attention? Looking carefully? Good. You'll want to keep doing that, because this is a web article and not an act of close-up magic. 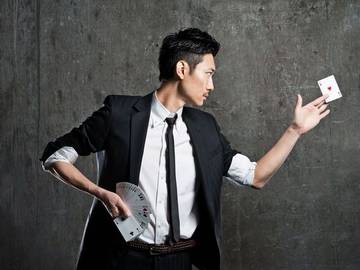 'Sleight' means “deceitful craftiness” or “stratagem” as well as “dexterity or skill.”

The noun phrase sleight of hand is defined as “a cleverly executed trick or deception” or “a conjuring trick requiring manual dexterity,” as well as skill or adroitness in doing these things.

Magician Tommy James recently brought the stories and characters of Dr. Seuss' beloved children's books to life on stage at Lowell Catholic Elementary School. Students in grades pre-kindergarten through 4 were delighted by his sleight of hand and creative tricks as he inspired the audience to love learning through reading.
— The Lowell (Mass.) Sun, 23 Apr. 2018

We often associate the phrase with magicians or three-card-monte dealers—people adept at moving things with the fingers without detection. A synonymous term is legerdemain, from a French phrase meaning “light of hand.”

What Does "Sleight" Mean?

The sleight in sleight of hand is its own word, one meaning “deceitful craftiness” or “stratagem” as well as “dexterity or skill.” It derives via Middle English from an Old Norse word, slœgr, meaning “sly” (and from which sly is also derived). A sleight, essentially, is an instance of being sly in one's movements.

Sleight is pronounced to rhyme with height. A homophone of sleight is slight, which as an adjective can mean “having a slim or delicate build” or “small of its kind or in amount” (as in “a slight lead in the polls”).

As a verb, slight can mean “to treat as slight or unimportant” or “to treat with disdain or indifference,” as in “she felt slighted by her co-worker when she wasn’t invited to the party.” The noun slight can refer to an act of instance of slighting or insulting another. Slight finds its origin in Middle English, from a word meaning “smooth or slight,” with a likely Old English ancestor found in a term meaning “level with the ground.”

Once in a while you will see the phrase sleight of hand rendered mistakenly as slight of hand. This interpretation is understandable when you think of the movements a magician makes as being barely noticeable (just as slight means "barely noticeable" in “felt a slight tremor”). But this spelling isn’t anywhere near common enough to become standard.

Now look in your front pocket. We have no idea what's there because, again, this is a website, but wouldn't it be cool if you suddenly had an ace of spades there? How did we do that?