"Slang is the worst of language weeds. Strive every day to uproot it and find choice, yet just as effective expressions with which to supplant the slang that leaps to your lips." 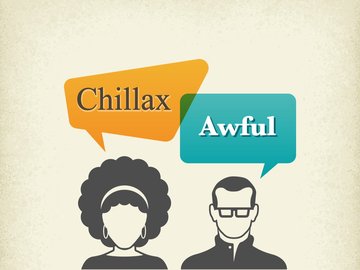 This was the advice of one Howard Roscoe Driggs, once a professor of English at the University of Utah and New York University, in his 1916 book Live Language Lessons. Though Driggs's book may be nearly 100 years old, many people today still react to slang as if it were a lesser form of language. Consider the comments on our definition of the word chillax (definition "slang : to calm down : relax"):

"My wife didn't believe me when I told her it was an actual word and in the dictionary!"

"I always use the word Chillax and wanted to prove that it was in the dictionary."

"My boyfriend didn't believe it was a word."

Believe it or not, many words accepted as Standard English today were previously considered to be slang. We need only look at the pages of a dictionary that was published at the same time that Driggs was inveighing against this dastardly strain of language: [Merriam Webster's Third Collegiate Dictionary. The Third Collegiate, published in 1916, contained 97,000 headwords, including a hefty dose of slang.

Here are some of the words that were slang in 1916:

Whether you find these words to be acceptable is a personal decision, but note: not a single one of them is labeled as slang in our dictionary today.

It raises the question of whether some of the more recent slang additions – legit, dis, stoked, crappy, and many others – might someday gain acceptance as proper English. Or will these words always be disputed as "language weeds"? In light of the changing views we have of the slang of a century ago, it is at least possible that in 2116 people will look back at these disputes and say, "chillax."