Drawing a Conclusion About 'Sketchy'

How did a word from design come to describe creepy dudes?

Most great ideas start from sketches. A sketch is, by definition, a rough drawing of something usually done as an initial draft. The notion of sketching out ideas even enters our language figuratively in such phrases as back to the drawing board. In contrast to a finished drawing, the word sketch suggests imperfection and a lack of refinement.

Sketch took a somewhat unusual path into English, through the Dutch schets and ultimately from the Italian verb schizzare, an imitative verb meaning "to splash." Both the noun and the verb sketch date from the 17th century. 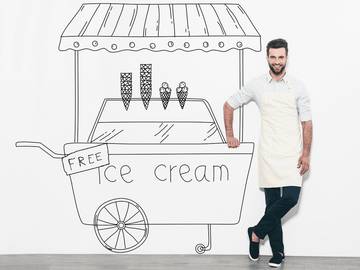 You simply must try the rum raisin.

The related adjective sketchy originally meant "of, relating to, or resembling a sketch":

In some of his later, sketchy kid portraits he seems to lay the groundwork for the 18th Century, the Rococo and the smile of reason.
—William Wilson, The Los Angeles Times, 22 Oct. 1989

And, because sketches are by nature rough and ill-defined, sketchy soon came to mean "wanting in completeness, clearness, or substance":

Little about the Cultural Revolution is taught in school. As a result, many of today's youth have only a sketchy understanding of the era.
—Charlene L. Fu, Associated Press, 9 June 1991

I must say that I didn't "get" Robert James Waller's first novel, "The Bridges of Madison County." I found it simplistic, sketchy, emotionally phony.
—Robert Plunket, The New York Times Book Review, 5 Feb. 1995

The details were sketchy at best. Something about three tall, college-aged Nigerians who were spotted playing pick-up at a Toronto rec center.
—Andy Katz, ESPN, 31 May 1999

Sketchy also sees frequent use in publications pertaining to bicycling, running, skiing, and similar sports where poor maintenance of a track or surface creates a hazard:

Every track in Missouri had its secrets-the bad lanes and the sketchy corners, the spots where a local knew enough to swing wide to glory.
—Pete Hesslier, Runner's World, December 1993

The ski was okay in the terrain park but sketchy in the halfpipe.
—Brian Metzler, Skiing, September 1998

While it provides additional stability on sketchy surfaces, it's harder to change your arc once you start the turn.
—Bicycling, December 2000

Pulling the lip of the roof at the end of the traverse involved sketchy placements in the 3/4-inch-thick ice, which gently overhung for 15 feet.
—Michael Benge, Climbing, 1 Aug.-15 Sept. 1996

Despite the association, there is no known etymological connection between this sense of sketchy and skid. One could be more inclined to make the connection that a road or trail that is not properly maintained for passing through—and thus perhaps lacking in clean boundaries—resembles a sketch, and is unsafe. This connotation is not new:

Ransom could see there was no crowd at Marmion, as soon as he got there, though indeed there was a rush, which directed itself to the only vehicle in waiting outside of the small, lonely, hut-like station, so distant from the village that, as far as one looked along the sandy, sketchy road which was supposed to lead to it, one saw only an empty land on either side.
—Henry James, The Bostonians, 1886

Next to many tents are stacks of freshly split firewood. The tent neighborhood grows, and soon acquires at least two sketchy streets with many vehicles parked along them here and there.
—Ian Frazier, The Atlantic, December 1999

From there, the extension of sketchy to describe a seedy or questionable area—as in a part of town not as developed as the rest—becomes logical:

And for good reason: Sorensen and Wardlaw left their daughter unattended in a pretty sketchy neighborhood -- a neighborhood, moreover, that they both had lived in long enough to know was marginal.
—Tucker Carlson, The Weekly Standard, 2 June 1997

Then, driving one day along Avenue A in a sketchy part of town, Hester saw two young men who'd been friends with his son Jessie Jr., now a senior wideout at South Florida and an NFL prospect.
—Austin Murphy, Sports Illustrated, 30 Nov. 2009

The adjective then extends in use to describe a person or characters who creates an impression of unsavoriness, or something that comes from an untrustworthy source. This use is particularly popular with younger speakers:

About two weeks after I broke up with my short-term beau, he started seeing one of my best friends (pretty sketchy, huh?).
—Cosmopolitan, April 2000

The sign-up was easy, the interface clean and intuitive. "I was a little nervous at first," says Geil, 25. "The idea of exchanging money via a mobile app seemed kind of sketchy."
—Felix Gillette, Bloomberg Businessweek, 24-30 Nov. 2014

The items would eventually be showcased in an art display to depict the secret underbelly of the Internet to unsuspecting museum-goers. Most of the items were fairly benign: There were bootleg designer clothes, cigarettes, some sketchy sneakers, and a slightly-worrying baseball cap outfitted with a hidden camera.
—The Daily Athenaeum (West Virginia University), 16 Sept. 2015

At one point, a sketchy guy slips Murdoc some kind of hallucinogen, which makes the dance floor spin off into another dimension.
—Madeline Roth, MTV.com, 7 Aug. 2017

As Mark Liberman of Language Log notes, the shift in the meaning of sketchy to describes things untrustworthy could be influenced as well by the phonetic similarity to other negatively tinged adjectives such as scummy, scurvy, scruffy, scuzzy, and skeevy.