The Left Hand of (Supposed) Darkness 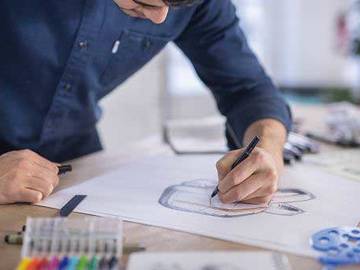 It all depends which way you're coming from.

We think of sinister as an adjective to describe what is frightfully suggestive of darkness or evil.

He wore a sombrero hat, with a wide leather band and a bright buckle, and the ends of his moustache were twisted up stiffly, like little horns. He looked lively and ferocious, I thought, and as if he had a history. A long scar ran across one cheek and drew the corner of his mouth up in a sinister curl.
— Willa Cather, My Ántonia, 1918

Werner runs the needle through the frequencies, switches bands, retuned the transceiver again, scouring the static. The air swarms with it day and night, a great, sad, sinister Ukrainian static that seems to have been here long before humans figured out how to hear it.
— Anthony Doerr, All the Light We Cannot See, 2014

Sinister comes from a Latin word meaning “on the left side,” and while the earliest uses of the word in English—dating from the 14th century—pertain to some measure of evil, forboding, or malevolence, others retain the Latin meaning of “left”:

PAROLLES. … you shall find in the regiment of

the Spinii one Captain Spurio, with his cicatrice, an emblem of

war, here on his sinister cheek; it was this very sword

Why Was 'Left' Considered Evil?

The association of the directional left with evil is likely attributed to the dominance of right-handed people within a population, and consequently the awkwardness of motions made from the left side of the body.

Such darkness wasn’t always attached to that side, however. The Ancient Celts, for example, worshipped the left side, associating it with femininity and the fertile womb. But beginning with the appearance of Eve on Adam’s left side in accounts of Genesis, the Christian tradition finds instances of the left side being pinned to immorality.

The Book of Matthew describes how God will divide nations on the Day of Judgment, “as a shepherd divideth his sheep from the goats; and he shall set the sheep on his right hand, but the goats on the left,” with those on the right sent to the kingdom of Heaven and those on the left “cursed, into everlasting fire, prepared for the devil and his angels.” Left-handed people comprise only 10 percent of the population, and the preference for the left hand demonstrated by the popular minority was attributed to demonic possession, leading to accusations of witchcraft.

In the 20th century, anthropologists and psychologists identified left-handedness as a biological anomaly, one associated with deviancy but that could be corrected away with behavioral reinforcement.

The historical association of sinister with evil or backwardness is balanced linguistically by the fact that dexter, the Latin word meaning “on the right side,” comes with a largely positive connotation that survives throughout its linguistic descendants.

To be dexterous, for example, is to be good with the hands (like a surgeon) or a clever thinker, while one who is ambidextrous uses one’s left and right hand equally well.

The French word for “right or straight,” droit, gives us our word adroit, with a meaning similar to dexterous. The parallel is carried on by other words. The French word for “left,” gauche, is used in English to mean “lacking social grace” (“it’s considered gauche to arrive without a gift for the host”); a synonym of gauche, also from French, is maladroit (“a maladroit attempt to express his condolences”), which again utilizes the French word droit.

And of course, our word right is used to mean “correct," “true,” or "ethically sound" (“a right answer"; "didn't have the right address"; “the right thing to do”).

A popular maxim found on refrigerator magnets says that if the right side of the brain controls the left side of the body, then only left-handed people are in their right minds. In spite of that observation, the linguistic bias against the left side, and left-handedness in particular, is entrenched in English and many other languages, and likely will never go away.