One of the first things that English speakers learn about nouns is that they are singular ("a cup") and plural ("many cups"). Dogs, cats, bills, lions, scissors are the plural forms of dog, cat, bill, lion, and...nothing. In Modern English, scissors has no singular form. 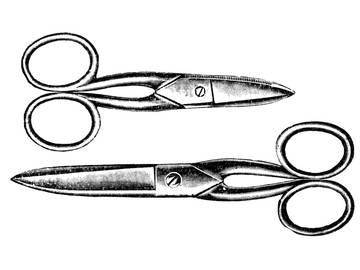 A pair of pairs of scissors.

Scissors is an example of a plurale tantum, or an English word that only has a plural form that represents a singular object. (Plurale tantum is not a plurale tantum: its plural is pluralia tantum). Though pluralia tantum name single objects, they are grammatically plural: "the scissors are on the table," "my pants are in the dryer." The shenanigans of English are myriad.

Scissors, like many pluralia tantum, traces back to a grammatically singular word. In Vulgar Latin, caesorium referred to a cutting instrument, and this Latin word was singular—even though the cutting instrument it named had two blades that slid past each other. When the word was borrowed into Middle French, French speakers gave it both a singular form (cisoire) and a plural form (cisoires). The plural didn't refer to multiple cutting implements, however; it was modeled on the two blades of a single caesorium.

By the time that the word scissors appeared in English in the 15th century, it was already fixed as a plural word...that nonetheless referred to one single thing. How did we distinguish between one scissors and a pile of scissors? We began calling an individual scissors a pair to emphasize the matched cutting blades. There's precedent for it. Before we called them scissors, we called them shears, and pair was used with shears for about 100 years before scissors arrived on the scene. This has become the standard denotation for any concrete noun that is a plurale tantum: a pair of glasses/pants/trousers/goggles/scissors/shears/tweezers, and so on.

The pluralia tantum for cutting implements have, as a group, also been adapted into verbs that are based on a nonexistent singular (just to be confusing). This gave us scissor (as in, "the kindergartner scissored the paper into strips"), shear ("he sheared his beard off"), and tweeze ("she tweezed her eyebrows").