Ever bought a candy bar that seemed somehow smaller than you remembered but that still cost the same? It's no illusion; it's shrinkflation.

When raw materials cost producers more, they sometimes react not by raising prices but by charging the same price for a package that contains a bit less. It's a kind of downsizing that bucks the decades-old trend of supersizing, and you can see its effects in almost every aisle of the grocery store. 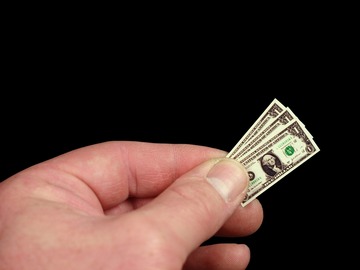 The British economist Pippa Malmgren is often credited with coining shrinkflation, and may indeed be responsible for the word now in use (see her comment in the Twitter conversation here). That said, shrinkflation had a previous (though maybe short-lived) meaning.

In his 2009 book Econoclasts: The Rebels Who Sparked the Supply-Side Revolution and Restored American Prosperity, Brian Domitrovic uses shrinkflation to contrast with stagflation (which is persistent inflation combined with stagnant consumer demand and relatively high unemployment). He writes, "Following World War II, the United States traded depression for an acute period of stagflation. Actually, it was 'shrinkflation,' in that the economy was contracting as prices surged." We haven't come across recent evidence of this use – it's Malmgren's use that has taken off in the past couple years.

Shrinkflation is only the latest in a series of words to put the -flation of inflation (of the economic variety) to work. Others include slumpflation and stagflation, and it's likely that that there will be still more in the future as economists and others aim to diagnose just what's going wrong out there.