What's the Past Tense of 'Shrink'?

If you decided to turn over a new leaf and finally start doing the laundry around the house, only to find that you used too much hot water, how would you explain to your significant other that their jeans no longer fit? We don’t mean to question how you would justify yourself (that’s your problem); the question is whether you would say “I shrank your jeans,” or “I shrunk your jeans”? Or would you instead adopt a bold and unconventional form (“I shrinked your jeans”) in the hopes that the ensuing conversation on inflections would cause your transgression to be overlooked? 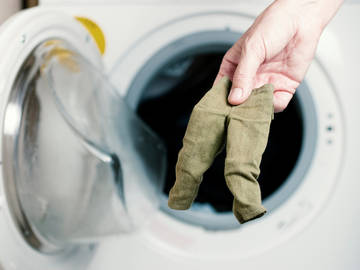 Use 'shrank' for the simple past ("I shrank your jeans") and "shrunk" for the past participle ("I have shrunk your jeans"). Herman Melville used the word 'shrinked', but you should probably not follow his example.

The short answer is shrank.

The slightly longer answer is "English is a complicated and messy language, with many variant forms overlapping in use and register over the years, and if you want to avoid shrinking clothes you should use cold water (or do a hand wash), and hang them up to dry, instead of using a dryer."

Now let’s look at the very long answer (the one for people who are avoiding doing the laundry, and need a diversion).

Origins of Shrink, Shrank, and Shrunk

Shrink is an old word, having been in continual use since before the 12th century. The earliest meaning was “to contract or curl up the body or part of it usually because of physical stress, fear, or revulsion.” In the following centuries, shrink has picked up a large number of additional meanings, almost all of which are in some way concerned with contracting, diminishing, or drawing back from a thing.

Putting aside the ways that this verb was inflected back in Old English (because you really do need to get around to doing your laundry sooner or later), it was, for hundreds of years, very common to see shrunk used as the simple past tense. That doesn’t mean that people didn’t use shrank, just that shrunk was more common. Around the 18th and 19th centuries shrank began to see increased use in this case (at least in written English). At this point, shrunk began to be used more frequently as a past participle (“the form of the verb that is used with “have” in perfect tenses and with “be” in passive constructions”).

In the present day, most style guides will recommend using shrank for the simple past (“I shrank your jeans”) and shrunk for the past participle (“I have shrunk your jeans”) or when using the passive voice (“jeans have been shrunk”). What of shrinked and shrunken? Shrinked may be found in the works of many writers over the past five hundred years.

If Abraham I say, had thoughte on thys maner, or had shrinked so in his faith, I thinke hee would neuer haue intended to offer vp his onely sonne….
Urbanus Rhegius (trans. By John F.), A Necessary Instruction of Christian Faith, 1579

“He got so frightened about his plaguy soul, that he shrinked and sheered away from whales, for fear of after-claps, in case he got stove and went to Davy Jones."
Herman Melville, Moby-Dick, 1851

No stern lecture, no dogmatic sermon, but a clear Mormon message about sexual morality. Not that Perry shrinked from tough talk.
Peggy Fletcher Stack, The Salt Lake Tribune (Salt Lake City, UT), 31 May, 2015

This is, however, one of those cases where evidence of a word being used a certain way does not necessarily mean that you should use it thusly. You can also put your red socks in the wash with your white shirts, but … c’mon, didn’t anyone ever explain laundry to you? In the citations listed above the first use is archaic, the second is a novelist replicating speech, and the third would be generally viewed as an error.

Similarly, it is not difficult to find examples of writers using shrunken, especially as a past participle (H. G. Wells, in his A Short History of the World, wrote “The great Hellenic world had shrunken to a few possessions round the nucleus of the trading city of Constantinople”). However, most people who care about such matters would say that shrunken should properly only be used as an adjective.

And Mr. Backhouse pointed with withering scorn to a small, shrunken old man, who sat dangling his legs on the shaft of the cart, and whose countenance wore a singular expression of mingled meekness and composure, as his partner flourished an indignant finger towards him.
Mrs. Humphry Ward (Mary Augusta Ward), Robert Elsmere, 1888

In the event that the inflection of shrink/shrank/shrunk is still troublesome to you, some people appear to have an easier time distinguishing between the similar forms of drink/drank/drunk, and you may find it useful to use this as a guide. Present tense: "I drink your milkshake." Simple past: "I drank your milkshake." Past participle: "I have drunk your milkshake."