The Scoop on Sherbet vs. Sherbert

They taste the same

Sherbet, pronounced "SHER-but," is the usual word for the frozen sweet dessert made from fruit or fruit juices. Sherbert, with an additional r in the second syllable and pronounced "SHER-bert," is less commonly used. In Britain, sherbet is a sweet powder used to make a drink bubbly or eaten by itself.

On a hot summer day, there's nothing like sweet, cold sherbet on your tongue to make you feel cooler. Or maybe you call it "sherbert." Or maybe you get all hot under the collar when people call it that. Maybe in your mind the confection can only be called "sherbet" (SHER-but) and people who call it (and spell it) "sherbert" (SHER-bert) are bumbling Neanderthals.

Well, we, your friendly dictionary folk, are here to set the record straight. 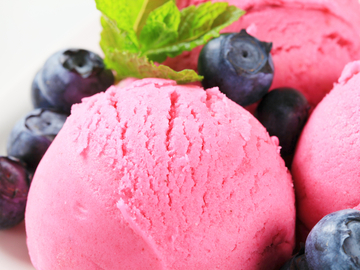 Though the words 'sherbet' comes from lack an 'r' in the second syllable, the 'sherbert' spelling has been around since the word entered English. It is now a fully established variant spelling.

The word in question is from Turkish and Persian words that both trace back to the Arabic word sharba, meaning "drink." All three words—the Turkish and Persian words are şerbet and sharbat, respectively—lack an "r" in the second syllable, but when the word was imported into English in the early 17th century it was coming from languages many English speakers considered exotic, and spelling was all over the place. Among the many variations that existed in the early years, two that appeared then are still in use today: sherbet and sherbert.

By the late 18th century sherbet had become the established spelling, but after only a few intermittent uses in the 18th and 19th centuries, sherbert staged a minor comeback in the 20th century. It's now a fully established (though far lesser-used) variant.

And what exactly is sherbet/sherbert? Originally the word referred to a cold drink made with sweetened and diluted fruit juice. In the U.S. the word now most commonly refers to a frozen dessert made with milk (or cream) and flavored usually with fruit juice, with egg white or gelatin sometimes added. And to get all technical for a minute, sherbets in the U.S. must by federal regulation contain between exactly 1% and 2% butterfat. (This distinguishes sherbet from sorbet—pronounced \sor-BAY\ or sometimes \SOR-but\—which is typically dairy-free.) In British English sherbet (or sherbert) often refers to what is also called "sherbet powder": a sweet powder used to make an effervescent drink.

And that's the scoop on sherbet and sherbert. We hope this particular scoop will only make scoops of the real thing taste all that much sweeter.