Senpai may not have noticed us, but we've definitely noticed senpai

Has senpai noticed you? Are you sure? WOW. We are SO happy for you.

If you understand what we're talking about you might be an anime and/or manga fan. Or spend a lot of time on Tumblr. Or be a millennial. Or whatever comes after the millennials (which is probably Generation Z, but the jury is still out on that designation). 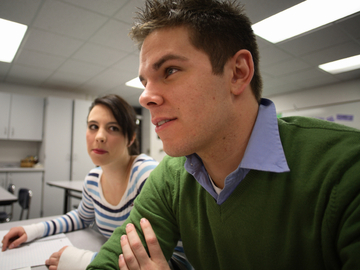 In informal use, 'senpai' can refer to anyone whose attention you want to get—that could be someone you admire and want to be friends with or someone you're interested in romantically.

In informal use, senpai (also styled as sempai) can refer to anyone whose attention you want to get—that could be someone you admire and want to be friends with or someone you're interested in romantically.

Senpai made its first appearance in Urban Dictionary back in 2004, when a user defined it as "an upperclassman." Other entries (a number of which mention anime and manga) have since been added; it's defined there variously as "someone older than you," "someone you look up to," "mentor," "senior," an "older person who you adore." There are more.

The top definition (as chosen by users) is "someone who will never notice you."

Which is sad, because as KnowYourMeme tells us, it's all about getting senpai to notice you. In anime and manga, there are frequently characters trying to get the love or attention of a senpai, and phrases about being noticed by senpai have become popular catchphrases.

In the world of published, edited English text, however, senpai has a narrower range of meaning. It typically refers to a mentor:

Seattle Mariners right-hander Hisashi Iwakuma was the senpai (the mentor) to New York Yankees right-hander Masahiro Tanaka while they were teammates for five years with the Rakuten Golden Eagles in Japan. — Bob Dutton, The News Tribune (Tacoma, Washington), 10 June 2014

Junko Matsunaga was a scholarship student at Willamette University during my spring semester. She became my senpai, my upper class mentor. — Satomi Ono, The Statesman Journal (Salem, Oregon), 19 Dec. 2011

The term is perhaps on its way to joining sensei, which is defined in this dictionary as "a teacher or instructor usually of Japanese martial arts (such as karate or judo)." Our earliest evidence of sensei being used in English is from 1968. In Japanese the word is used more broadly to mean "teacher" or "master." Like sensei, senpai is used in English in contexts of martial arts as well as religious instruction, in particular Buddhism. Sensei in those contexts refers to someone of a higher rank than senpai.

Ranking below a senpai is a kohai. Kohai, typically translated as "junior" or "protégé," is often used to contrast with senpai:

In the team's Japanese group dynamics, Swift, who played under Hill in Seattle at age 19 after being picked 12th over all in the 2004 N.B.A. draft out of high school, has taken the role of senpai (senior) to the kohai (junior) Tyler.
— Christopher Johnson, The New York Times, 21 Apr. 2011

And then there is sempai-kohai, a pillar of Japanese civilization, which governs the relationship between an older mentor (sempai) and his younger charge (kohai). For years, this meant the rookies refused to challenge veterans for spots on the power play. They felt obligated to pass to their senior teammates whether or not they were open.
— John U. Bacon, ESPN, 13 Dec. 1999

Sporting a pointy gray beard, a monk's spiky bangs, and elegant black suits that might have been purchased at the Zen couture section of Armani of Tokyo, Connery looks like Obiwan Kenobi, and that's just how he presents him-self: as the all-knowing senpai to Snipes' callow kohai.
— Owen Gleiberman, Entertainment Weekly, 30 July 1993

Senpai is not yet a fully naturalized member of the English language, as the frequent glosses of it in context demonstrate.

But senpai is real. Which we know will be reassuring to a certain set.