Words are much better // Down where it's wetter // Take it from me. 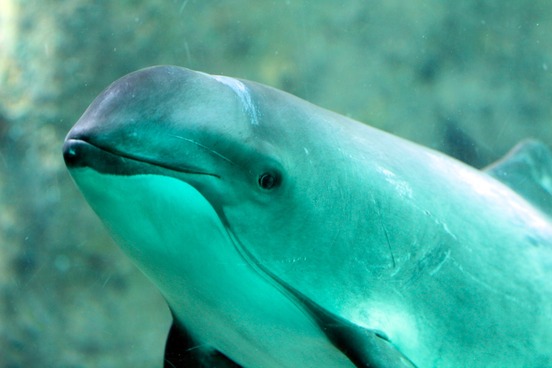 Pity the porpoise: sometimes endangered, often thought to be a fish, usually confused with dolphins. From its very earliest appearances, the porpoise has been misconstrued: its name comes from the Latin words for "pig" and "fish."

The word porpoise first came into English in the 14th century through French, who had taken the name ultimately from the Latin words porcus ("pig") and pisces ("fish"). The porpoise likely got its name because its rounder body and snub nose reminded the Romans and then the medieval French of a pig's snout. From the beginning, the English word referred to any of the small toothed whales of the family Phocoenidae:

Because they are similar in build to dolphins, they are often confused with them. According to the National Ocean Service at NOAA, you can tell them apart by looking at the nose, the dorsal fin, and the body. Dolphins typically have longer noses and bigger mouths, more curved dorsal fins, and sleeker, leaner bodies than porpoises do. The one thing they have in common is that neither the dolphin nor the porpoise is a fish: they are both mammals. 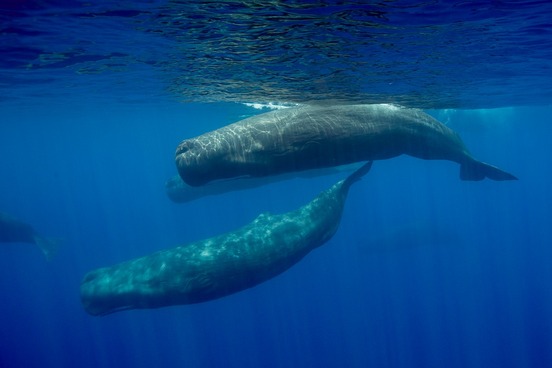 When you think "whale," it's likely that you picture a sperm whale: the enormous toothed whale with a long body and a massive square head. It's the whale that drove the 18th- and 19th-century whaling industry in North America; it's the same one immortalized in Herman Melville's Moby Dick.

But as familiar as the whale is, many people have lingering questions about its name: is it really named for sperm?

Sort of. Sperm whales are the source of two substances that were considered incredibly valuable during the 18th- and 19th-centuries. One was ambergris, a substance that formed around squid beaks found inside the whale's stomach, and which was used in perfumery. The other was spermaceti, an oily substance found in a large head cavity in sperm whales. Spermaceti was used in oil lamps (where it produced a smokeless flame), cosmetics, candles, and ointments, and it was in high demand. Sperm whales were almost hunted to extinction for their spermaceti.

But what is spermaceti, and why does it have that slightly uncomfortable name? Its name is taken directly from medieval Latin: spermaceti literally translates to "sperm of the whale." In the early Middle Ages, scientists mistakenly thought that the substance was whale sperm. 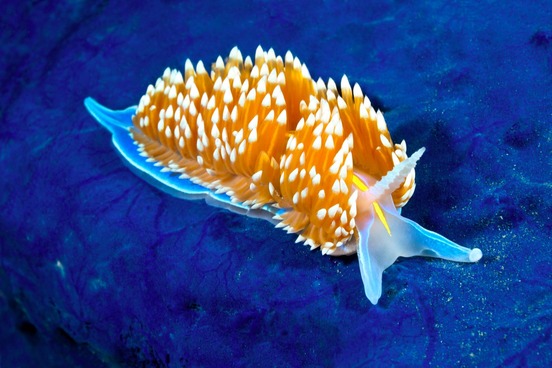 Nudibranchs (no -e- in that plural!) are a type of mollusk that doesn't have a shell in their adult form and also doesn't have true gills. They're often remarkably colorful, and are sometimes called by the less-whimsical name yet still apt name sea slug.

If you think that nudibranch has something to do with nude, you're right. The name is a combination of the Latin nudus, "nude," and the Greek branchia, "gills." Though that final element looks like branch, it doesn't sound like branch: play

Nudibranchs are gastropods, which, when translated literally from the Greek, means "stomach foot." The "foot" refers to the large muscle they use to move around, and this foot runs along their underside, or belly, of the animal. Snails, slugs, and mollusks are gastropods. 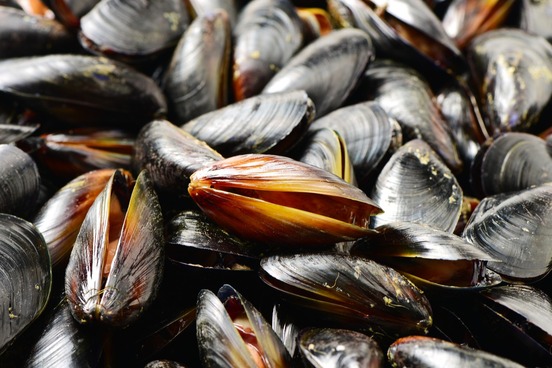 Mollusks are most properly members of the phylum Mollusca, the largest marine phylum, but we tend to think of them as "things in shells": snails, clams, scallops. But the word itself traces back to the Latin mollis, which means "soft."

In Latin, molluscus, an adjective derived from mollis, was often paired with nux to describe a thin-shelled nut (nux) with a soft interior (molluscus). When the name for the phylum was created in the 1700s, scientists remembered the thin-skinned nut with the soft interior and used its Classical Latin name to create Mollusca. The name of the phylum was borrowed into French as mollusque to refer to individuals within that phylum, which is how we ended up with the name mollusk for the phylum Mollusca.

Not all mollusks have external shells: the octopus and squid are two famous members of Mollusca who are more "soft" than "thin-shelled." 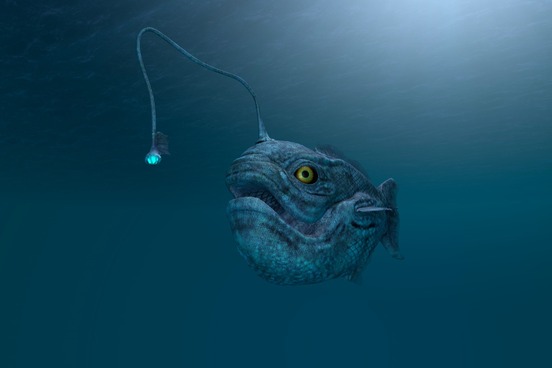 Common names for sea-dwellers often have something to do with how the creature looks (sea slug) or what it does. In this latter category is the anglerfish. Or, rather, the anglerfishes.

The name anglerfish has been applied to a wide variety of fishes with some sort of dangling lure, which is waved around to help lure in prey. When it and the synonym angler were applied to these creatures, it referred specifically to a type of anglerfish that is flattened, lives at the bottom of the ocean, and has a very large and wide head, with a body that looks like more of an afterthought. This type of anglerfish, genus Lophius, is also called a sea-devil, frogfish, and monkfish (though monkfish is also occasionally applied to another creature, the aptly named Squatina squatina, which is actually a shark).

But the name anglerfish was too good to give to just one genus of fish. In time, the name was given to an entire order of both benthic and pelagic fishes, the Lophiiformes, comprising between 16 and 18 different families which include the goosefishes, monkfishes, frogfishes, handfishes, batfishes, sea toads, a host of sea devils (including prickly, warty, doublespine, black, wolf-trap, fanfin, needlebeard, whipnose, leftvent, and the oddly named dreamer), and the delightfully named footballfishes.

Anglerfish came into English in the 1800s and was a compound of angler, meaning "one who fishes," and fish. 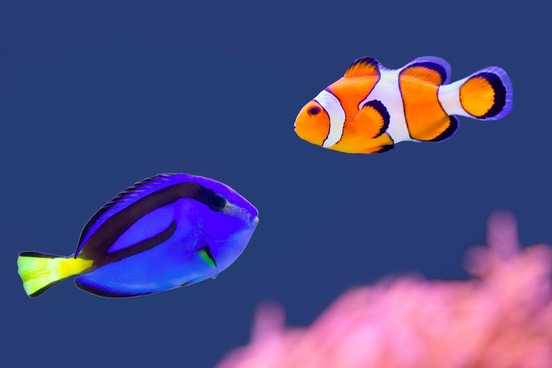 Sometimes the names of our ocean-dwelling friends are a little more obscure. Tang, for instance, refers to a family of bony fishes. You may be familiar with this word already: it's a general noun that refers to a sharp, distinctive flavor. And the "fish" tang is a direct descendant of the "flavor" tang.

The word tang itself likely came into medieval English through an unknown Scandinavian ancestor word. In its early days, it was used to refer to a sharp point, and especially a sharp projecting point on a tool:

The handle is neere a yard long, with an Hoop at the end for the Tang of the Trowell to be fastned in.
—Randle Holme, The Academy of Armory, 1688

The sharp pointedness of the literal tang gave rise to the figurative use that is now the most common one today: "a sharp distinctive often lingering flavor" or "a pungent odor."

The fishes didn't get called tangs because of their strong flavor, though. The other name for this family of fish is surgeonfish, so called because they typically have a sharp, movable spine on each side of their bodies near the tail that is capable of inflicting a painful wound. Those sharp points, like the tangs of tools, gave the surgeonfish its alternate name.

Chances are good that you've seen a tang, but you just don't know it: the character Dory from "Finding Nemo" and it sequel "Finding Dory," is a type of fish known as a blue tang. 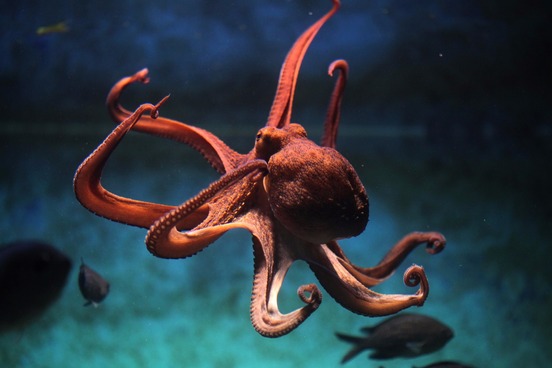 The octopus is a shy and usually solitary animal, but we seem obsessed with what to call more than one of them. Octopus first showed up in English in the mid-1700s and was given the standard English plural: octopuses. Easy, right?

No, of course not. There was a grammatical movement afoot at the time to make English less irregular by making it more like Latin—nice and even and predictable. These grammarians took a bunch of the Latin-based words in English that end with -us, like octopus, and gave them proper Classical Latin plural endings. Enter octopi, the "correct" plural of octopus.

There's just one small problem: octopus isn't Latin. It's ultimately from Greek. But that's okay, because smarter grammarians intervened and gave octopus the Greek plural ending it needed. And hence we have octopodes, which is pretty rare and appears only in British English.

All these grammarians forgot just one thing: whenever a word from a foreign language enters English, it becomes an English word and gets inflected just like other English words. Octopuses was just fine.

Common usage has meant that both octopuses and octopi are fine in everyday use, though octopodes is still relatively rare. 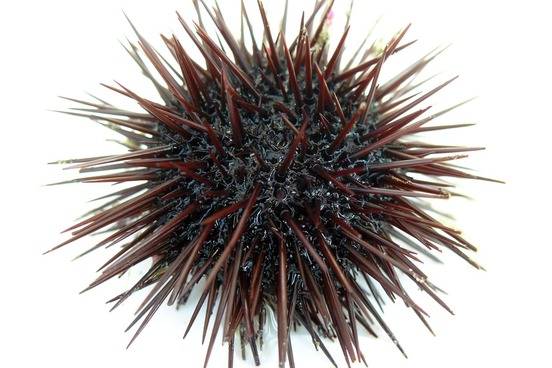 Sea urchins, small, spiny, globular animals, look less like animals and more like dangerous tennis balls. Sea urchins come in a number of colors and shapes, but all sea urchins have two things in common: they are encased in a very thin shell (called a test), and they are covered in movable spines.

Their name may make you think that they are the playful Dickensian scamps of the sea. While they are connected to that sense of urchin, they are not, as far as the dictionary can ascertain, playful or Dickensian. The word urchin used to refer to a hedgehog.

Urchin takes a very winding road into English, but it originally comes from the Latin name for a hedgehog, eris. It referred to a hedgehog for several hundred years before being applied to a number of other things: goblins (thought to take the shape of a hedgehog), people with hunched backs (likely because of the humped appearance of a hedgehog), and eventually playful or mischievous children. This is the urchin that we're most familiar with today, thanks to Dickens' portrayal of them in Oliver Twist.

The sea urchin takes a straighter path to the original "hedgehog" meaning: because of its rounded, spiny appearance, it was originally called the sea hedgehog. Nowadays you're more likely to see sea urchin on a sushi menu: bright yellow, salty, and grainy, the harvested "roe" of the sea urchin (which, truth be told, is not true roe but is instead the gonads of the sea urchin) is a delicacy loved by some and is called uni on sushi menus.