It's something rich and strange.

Historically speaking, a sea change isn't simply any change—it usually describes a marked change or transformation in how things are done. The phrase is often favored by journalists who look back on how something has altered substantially:

For more than 30 years, the American economy has been in the midst of a sea change, shifting from industry to services and information, and integrating itself far more tightly into a single, global market for goods, labor, and capital.
— Don Peck, The Atlantic, September 2011 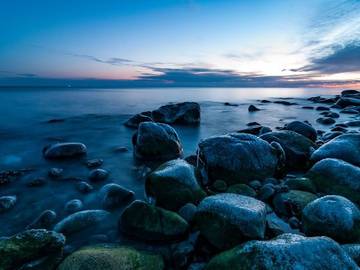 The word has taken on a broader meaning of "a marked change."

Perhaps owing to its poetic imagery, sea change has been used in titles by various artists, from Ernest Hemingway (short story) to Robert B. Parker (novel) to Beck (alternative-rock album).

The term originates in a work very much associated with the sea: Shakespeare's The Tempest, written around 1610 and set on a remote island. In Act I, Scene ii, the sprite Ariel speaks of a literal change brought about the sea:

Of his bones are coral made;

Those are pearls that were his eyes;

Nothing of him that doth fade,

But doth suffer a sea-change

Into something rich and strange.

Speaking in song to the prince Ferdinand, Ariel insinuates that Ferdinand's father, the king Alonso, has perished in the shipwreck that the storm has caused. (Spoiler alert: Alonso later turns up alive.) The "sea-change" has a double meaning: not only has a change occurred in the form of Alonso's supposed death, but the weathering of his corpse is compared to the slow effects of seawater on pearls and coral.

In later centuries, use of sea change would echo Ariel's song by utilizing the full phrase suffer a sea-change.

I have not inquired among my medical acquaintance, whether Turtle, and cold Punch, with Hock, Champagne, and Claret, and all the slight et cetera usually included in an unlimited order for a good dinner - especially when it is left to the liberal construction of my faultless friend, Mr. Radley, of the Adelphi Hotel - are peculiarly calculated to suffer a sea-change; or whether a plain mutton-chop, and a glass or two of sherry, would be less likely of conversion into foreign and disconcerting material.
— Charlies Dickens, American Notes for General Circulation, 1842

Not knowing the term's origin, some might interpret sea change to suggest something about erosion. What is actually suggested by the figurative use of sea change is a sense of permanence and alteration of something, to the point of it no longer resembling what it once was.

However, a weakening of intensity has crept into the phrase, which has aggrieved some usage experts, including the grammarian H. W. Fowler, who in his Modern English Usage wrote that suffer a sea change "is one of the most importunate and intrusive of irrelevant allusions and hackneyed phrases." With that weakening has come a corresponding adjustment of the verb to which sea change is the object. Sea changes aren't just suffered anymore; now they are just as likely to be undergone or experienced.

William Safire echoed Fowler's aggrievement. "Four centuries ago, the phrase had freshness," Safire wrote in 1994, "but its recent vogue has made it waterlogged." Safire lamented writers' fondness for the term to refer to any kind of change, not just the major metamorphosis that Shakespeare intended. But sometimes change is major in the eye of the beholder. When we encounter sea change today, it can describe any kind of change:

A sea change in America politics has taken place during the past two years, whereby environmentalists and their opponents appear to have switched sides. Instead of being associated with fat-cat polluters happy to make a profit even if it poisons our children, the anti-environmentalist position has become identified with folks like the Roberges. Meanwhile, it's the environmentalists who are now portrayed as the bad guys, hiring lots of lawyers, consorting with congressman and partying with the Clintons.
— Eric Alterman, Rolling Stone, 20 Apr. 1995

There's been a veritable sea change in the past 15 years: Consumers in the United States and abroad now tend to prefer riper, more powerful wines.
— Daniel Sogg, Wine Spectator, 15 May 2006

So if you're not afraid of a grammarian's scolding, or are just a Beck fan, feel free to take to the sea.