Not the dime-store knockoff of the crime-solving cartoon dog.

The DIY (do-it-yourself) culture has been a rich field from which we harvest all sorts of new terms, though sometimes those terms are opaque to the uninitiated. Take the language around kombucha. 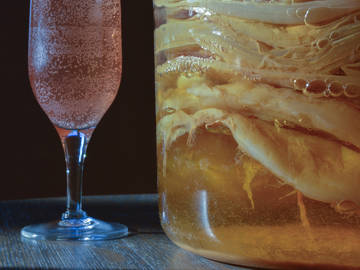 Scoby and the mystery of the tea slime.

Kombucha, for those not in the know, is most often used these days to refer to a sweet fermented tea purported to have health benefits. Its earliest appearance in English was for a different tea—kombucha first referred to the mix of yeast and bacteria that fermented that tea. This use goes back to the early 1900s. Kombucha wasn't applied to the tea itself until the late 1900s.

When the word kombucha needed differentiation, kombucha fans began to refer to the yeast-bacteria mix by a few different names. Kombucha mushroom and then mushroom are the earliest words we see applied to that mix, very likely because the mat of fermenting cultures looks a little like a mushroom (albeit a flat and slimy one).

But this differentiation needed a bit more work: mushrooms are a fungus, and none of the microbes that ferment the tea are fungi. In the late 1990s, we begin to see the acronym scoby pop up to refer to refer to the "symbiotic cultures/colony of bacteria and yeast" that make sweet tea into kombucha. (Some object to the use of colony in the acronym, as colonies typically consist of just one species of bacteria or yeast.)

Because scoby is an acronym, it gets an irregular plural:

There's really no arguing that it's ugly. And kind of alien-looking. And yeah, even downright gross. But dang it! Scobys make some delicious kombucha!
—Emma Christensen, thekitchn.com, 8 May 2017

appears both in all-caps and lowercase:

There will be SCOBYs and kombucha available for purchase.
—Tampa Bay Times, 14 July 2017

If you crave the refreshing fizziness of beer, you'll feel satisfied sipping on kombucha, an easily accessible fermented drink typically made from black tea, sugar and "scoby"...
—USNews.com, 3 July 2017

and its pronunciation is still variable: most of the sources we found say /SKOH-bee/ while a few say /SKOO-bee/.