Back To School Means Time For Scaffolding

This back-to-school season, adults may spend an evening sitting at classroom desks that are far too small for them and listening to their child's teacher talk about strategies for success in the classroom. Those adults might also hear a bit of educational jargon, which includes the term scaffolding. 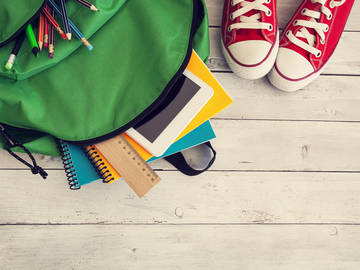 Get a vocabulary lesson before school starts.

The verb scaffold goes back to the 16th century, where it had a more literal meaning: "to furnish with a stand or scaffold." The verb gained a number of extended meanings, including referring to hanging tobacco leaves prior to curing them, or figuratively propping something up ("New Titles may be Scaffolded with Laws," C. Blount, 1693).

Scaffolds are handy things and apt metaphors. One scientist of the 20th century, Jerome Bruner, made the most of that metaphorical application. A psychologist, Jerome Bruner is best known now for his contributions to the cognition of learning, and he's considered one of the founding fathers of cognitive psychology. He was deeply interested in cognition and learning, and much of his published work focuses on this.

Education was undergoing massive reform in the 20th century as psychologists like Bruner brought their field to bear on educational techniques. One earlier Soviet scientist, Lev Semenovich Vygotsky, had proposed in one of his works the "zone of proximal development": that there is a place between not knowing something and knowing something where a child's rich but disorganized and spontaneous concepts of life meet the structure and systems of adult reasoning and logic. Students gain knowledge through being guided through this zone.

Many education specialists wrote about and built on the idea of Vygotsky's "zone." In 1976, Bruner, along with his colleagues David Wood and Gail Ross, released a paper on tutoring in which they referred to the mechanisms of moving students through this zone as "scaffolding":

But the intervention of a tutor may involve much more than this. More often than not, it involves a kind of "scaffolding" process that enables a child or novice to solve a problem, carry out a task or achieve a goal which would be beyond his unassisted efforts. This scaffolding consists essentially of the adult "controlling" those elements of the task that are initially beyond the learner's capacity, thus permitting him to concentrate upon and complete only those elements that are within his range of competence.
—Bruner, Wood, and Ross, The Role of Tutoring in Problem Solving in The Journal of Child Psychology and Psychiatry, 1976

The scaffold is a perfect metaphor for the work that Bruner et al. were suggesting: it's set up around a structure that needs shoring up, enables work to progress as necessary, and then is removed when no longer needed. Scaffolding and instructional scaffolding have become standardized terms within education and early-childhood development. We've not yet seen this particular sense of scaffold move out into other fields, but the structure for it to do so is there.