In the northwestern reaches of North America there may or may not exist a hairy humanoid called Sasquatch, or Bigfoot. Sasquatch is either unremarkably tall (about 6 feet) or exceptionally tall (as in 15 feet), but is indisputably an appropriate topic of study for cryptozoologists. What interests us here, though, is whether Sasquatch is elusive or illusive. Which one you choose has everything to do with whether or not you believe. 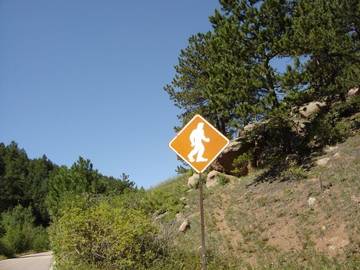 We want to believe.

If Sasquatch is elusive, it eludes those who try to find it: oh, it's out there; it's just difficult to find. But if Sasquatch is illusive, it's illusory—that is, it's based on something that is not true or real.

The words get confused. Or, more accurately, illusive gets used where elusive is intended. The reasons for the misuse are as obvious as a ginormous footprint on a Pacific woods trail. The words sound identical, and illusive looks like a bunch of other common words: illusion, illusory, illustrate. Elusive, on the other hand, can look as odd to the unfamiliar as a barrel-chested primate with Neanderthal visage; it's just not that commonly seen out and about.

Both elusive and illusive have their origins in the Latin word ludere, meaning "to play." Illusive made it into English first; current available evidence dates it to the early 17th century, with its synonym illusory appearing just a few decades later. The pair was preceded by centuries, though, by the noun illusion, a word that in its 14th century infancy referred to the action of deceiving. Elusive too is linked to ludere by a related noun: elusion, which refers to the act of eluding, or to an escape, is also a child of the early 17th century, making it about the same age as both illusive and illusory. The verb elude, which in its most common uses has to do with avoiding or escaping, came into use in the second half of the 17th century; elusive was appearing in use by the end of the 18th century.

You can describe Sasquatch as "elusive" if you want to; what you're saying in that case is that Sasquatch is hard to find and catch because it so often eludes those who pursue it. You can describe Sasquatch as "illusive" too; in that case you're saying that Sasquatch is like a mirage or a rainbow: impossible to reach or grasp because it's not real or has no material form. Illusive, though is more often applied to abstract nouns than to concrete ones, so an even more apt Sasquatch-related use would be to describe, say, the "illusive goal" of getting Sasquatch to pose with you for a selfie. Anyone who proves that illusive goal as merely elusive gets a free dictionary.