How did English get so salty?

The word salty has in recent years been appearing more and more frequently outside of its culinary applications.

From Boss (74): “Can I say this meeting got lit if I mean people were getting upset?”

Me: “No but you can say they were salty about it.”

Such use often includes a nod to the word's culinary applications.

Salty took a circuitous route to get to where it is today. It first appeared in the 1440 Latin-English dictionary Promptorium Parvulorum as a translation of the Latin salsus, which means both "salty" (tasting of salt) and "salted" (covered or preserved in salt). Salty referred initially to taste:

The Buckes or Hartes horne, whose leaues be sweete in tast, & somwhat saltie,...
— Thomas Hill, The Gardener's Labyrinth, 1577

as well as to things that contained salt:

if so the Onyons be put into hot water, or (as Plinie willeth) into saltie and warme water,...
— Thomas Hill, The Gardener's Labyrinth, 1577 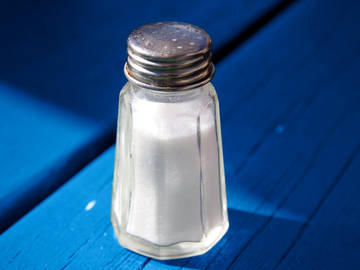 By the late 1800s, 'salty' referred to various aspects of naval life and culture. Since sailors had a reputation for colorful language, 'salty' soon came to refer to crude speech—and, later, to explosive anger.

This "containing salt" sense was often used of water, but it took several hundred more years for salty to be applied to things having to do with that most common body of saltwater: the ocean. Salty sea appeared as a fixed phrase in the 1800s, and by the late 1800s, salty referred to various aspects of naval life and culture:

"What are you going to do?" she asked.
"Clear that raffle," I answered, pointing to the tangled wreckage overside.
Ah, the decisiveness, the very sound of the words, was good in my ears. "Clear that raffle!" Imagine so salty a phrase on the lips of the Humphrey Van Weyden of a few months gone!
— Jack London, The Sea-Wolf, 1904

As London's quote hints, one notable aspect of naval culture that captivated people was, of course, their language. Sailors had a reputation for being colorful characters with colorful (that is, expletive-laden) speech, and soon salty came to refer to racy or crude language:

Sailors influenced several other senses of salty, including one that appeared as part of African American swing and hepcat culture. Thanks to sailors' propensity to spout off profanely and suddenly, salty came to refer explosive anger. Our earliest examples of it are in the phrase jumping salty, meaning "to get angry easily," appearing in the gossip columns of black newspapers:

Jumping Salty was even the name of a 1936 song by Ricky Simpson.

It continued in primarily African American use through the 20th century:

"I don't know why, but he's changed an awful lot lately—come jumping salty with me when I was back here. Next time he buzzes into me, I'm going to try his head. He's a big skipper all right—but he aint [sic] too big to fall."
— William H. Jones, The Triangle's End, 1954

The jump has dropped away, but the "angry" salty remains. Grrr.