A Short History of 'Retcon'

Retcon has had a busy life for such a young word. In the span of a few decades it has managed to become an abbreviation, change from a noun to a verb, and move from the jargon-filled chat rooms of the Internet to general parlance. 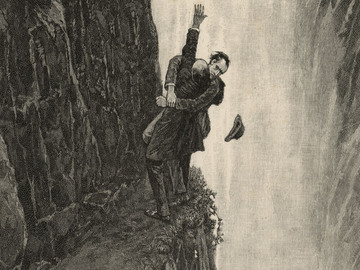 Though Sherlock Holmes died at the Reichenbach Falls, the author, Arthur Conan Doyle, retroactively declared that his death had been staged in what has been described as an early example of a retcon.

Retcon is a shortened form of retroactive continuity, and refers to a literary device in which the form or content of a previously established narrative is changed. Retcons are often encountered in serial formats such as comic books or television series, where they serve as a means of allowing the work’s creators to create a parallel universe, reintroduce a character, or explore plot lines that would otherwise be in conflict with the work. Essentially, a retcon allows an author to have his or her cake and eat it too, as it enables the return of dead characters, the revision of unpopular elements of a work, and a general disregard for reality.

The term appears to have its roots in a 1973 book by E. Frank Tupper titled The Theology of Wolfhart Pannenberg: “Pannenberg’s conception of retroactive continuity ultimately means that history flows fundamentally from the future into the past.” Although Tupper’s book, which was based on his 1971 Ph.D. dissertation, undoubtedly did quite well, it is unlikely that retcon would have been so successfully integrated into our language without retroactive continuity being used by other writers.

This began in the early 1980s when the term gained some degree of currency among comic book fans. The abbreviated form, retcon, started appearing in Usenet newsgroups before the end of the decade. Retcon's noun and verb forms appeared almost simultaneously.

The Book of Lairs I and II. They're in 1st Ed., but retconning should be no big task. Also, I would recommend picking up a couple issues of Dragon Magazine if you want to design such adventures, or Dungeon Adventures if you merely wish to run them.
—Jeff Williamson, rec.games.frp, 18 October 1989

It might also be nice to include slang that is specific to certain groups on the net, but which are specific to the net, such as "retconning" in r.a.comics.
—Boyd Nation, news.admin, 8 December 1989

By the turn of the 21st century retcon had moved beyond the province of the Internet, and began to surface in newspapers and books.

Then came the series finale, and one of the most famous -- and, depending on one's perspective, fascinating or infuriating -- retcons in the history of TV.
—Emily Nussbaum, The New York Times, 27 July 2003

Meanwhile, Luke, Rey and Chewbacca fly the Millennium Falcon back in time in a desperate, last-ditch attempt to retcon the prequels out of existence.
—Jeff Burlew, The Tallahassee Democrat (Tallahassee, FL), 4 May 2016

A successful retcon indeed: Brubaker took an idea that nobody wanted to see and made it something that pretty much everybody could enjoy.
—Brian Cronin, Why Does Batman Carry Shark Repellant?: And Other Amazing Comic Book Trivia, 2012

If retcon manages to stick in the English language it would hardly be the first word to have been given an assist from the world of comics. Brainiac is thought to have its origins in an early issue of Superman, and the pejorative term sad sack had its roots in George Baker's comic strip of the same name.