As some factory jobs return to the U.S., a new word has emerged to describe the process

The language of business has a businesslike efficiency: when an idea needs a word, a word is created to fill the vacuum. During the 1980s, offshore was first used to describe the movement of factories and jobs overseas as a cost saving measure. Offshore had been used to mean simply “from the shore” or “at a distance from the shore” since the early 1700s, but its use in the specific business sense of “outside the country” is much more recent, dating to the mid-20th century as an adverb. As a verb, it goes back to the 1980s, as does the noun offshoring—at around the same time that another enduring piece of business jargon was coined: outsourcing. 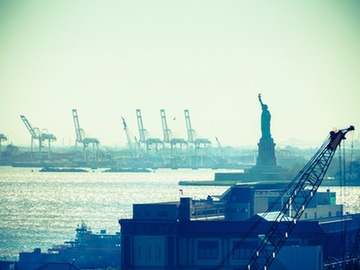 'Reshoring' describes the process of bringing offshore (or 'outsourced') jobs back to their country of origin.

More recently, the opposite phenomenon has been observed, as some factory jobs have returned to the United States after having been moved abroad. A new word describing this phenomenon has a familiar ring: reshoring. The general pattern for these terms seems to be that the adverb enters the language first, followed by the verb, followed by the -ing noun.

Here are some examples:

“We've seen in the UK in the last five years a shift of work offshore to India and other low-cost locations and then there has been selective, what they term reshoring: taking the stuff that was in India and moving back to the UK," he said.
—The Australian, 10 November 2009

The trend, known as onshoring or reshoring, is gaining momentum as a weak U.S. dollar makes it costlier to import products from overseas.
—Wall Street Journal, March 10, 2010

All these factors are reflected in Ashley Furniture's decision to spend at least $80 million to build a new plant south of Winston-Salem, N.C., that will employ 500 people. It represents the reshoring of a traditional industry in a state that had lost jobs to China.
—TIME, April 23, 2013

Perhaps the biggest stimulant to American manufacturing is the move toward reshoring. In recent years, companies have increasingly been bringing manufacturing jobs back to the U.S. from China and other countries.
—TheNewYorker.com, March 14, 2016

A competing term, onshoring, makes sense as a direct opposite of offshoring, but it hasn’t made the fast progress we see for reshoring. With language, as with business, if competition creates winners, it sometimes leaves behind the losers.