Records scratch. That is, the vinyl they are made of can be scratched with a sharp or hard object, causing audible pops when played. It’s paradoxical that the terms record scratch and record scratching refer to completely different sounds: they could refer to the sound of a needle zipping briefly off or across the surface of the vinyl. This sound (more of a zip or whoosh than a pop) was usually the unintentional and audible evidence of a mistake. A different sound could be made by keeping the needle stationary in the groove of a record and rotating the turntable back and forth slightly to produce a repeatable short sound—this is the sound that we typically think of that integrated into hip-hop by DJs in the 1970s. 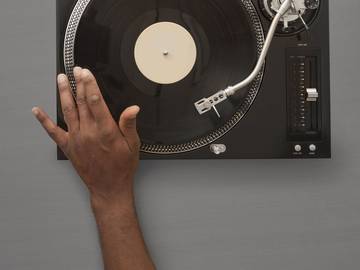 By the ‘80s, the terms had moved beyond music journals and were being used in print in major newspapers:

In addition, they work with a live band rather than a record-“scratching” dee-jay.
—Jeff Spurrier, The Los Angeles Times, 15 May 1983

Mr. Hancock is a veteran jazz pianist who has kept up-to-date with the latest gadgets and styles; the Rockit Band includes Grandmixer D. ST., whose instrument is a turntable and who makes sounds by ''scratching'' records back and forth.
—Jon Pareles, The New York Times, 17 Jun. 1984

The DJ hand-turns a record to "scratch" the music and make sound effects, or intersperse other music.
—Herald Sun (Melbourne, Australia), 22 April 1988

Record scratch as a description of the sound itself was initially used in music contexts:

"In terms of having stuff like the record scratches and organ sounds, adding them to the live performance would mean dealing with tape loops and other musicians," [Amber] Valentine said.
—Rob Bailey, Arizona Daily Star, 16 November 2001

Subsequently, record scratch came to be used in contexts that referred to sound effects rather than music:

The term then moved from the literal to the figurative: these sound effects were so often used to accompany the depiction of surprise or a sudden change of subject on TV and in movies that record scratch has come to mean “something that abruptly calls attention to surprise or change”:

But Pelosi's statement refers to Spicer's comments as "downplaying the horror of the Holocaust." It's a record scratch of a line: Spicer didn't downplay anything. He outright denied that Hitler used chemical weapons against "his own people."
—Nora Loreto, rabble.ca, 12 April 2017

A dictionary definition of record scratch would incorporate both the literal and figurative elements of its use:

: the sound of a phonograph needle suddenly producing a single scratching sound on a record as an abrupt interruption—used to call immediate attention to something

Record scratch is often used attributively to modify moment, showing that the associations made of the sound effect have become clichés:

On TV it'd be one of those record-scratch moments when everything stops and the high school kids stare at each other.
—Jamie Kastner, National Post, 12 February 2005

I admit, the trailer has all the hallmarks of a bad children’s movie – the cheesy voiceover, the record scratch moment, the prerequisite scatological humour where Kevin Spacey urinates in his ex-wife’s handbag, and the wordplay.
—Jack Bernhardt, The Guardian, 9 May 2017

The sound and the rhetorical interruption—the literal and the figurative use of the term—are often explicitly connected:

A record scratch sounded in my head one weeknight this January, when a pharmacist at my local drugstore told me my birth control pills would—for the first time—cost more than $50 a month.
—Susie Poppick, Time, 18 February 2015

This connection brings record scratch full circle, with its use as an interjection to stand for the rhetorical equivalent of the sound itself, symbolizing the interruption that changes the subject suddenly or calls attention to a new idea:

Does she want to? "Well, you hooked me up with somebody and we chat from now and then," she offered, coyly. Record scratch. What's this now?
—Billy Nilles, eonline.com, 23 April 2017

Sometimes people complain about the shortened attention span that seems to have accompanied the digital age, but it’s notable that some recent and efficient shorthand expressions are pure analog.