One consequence of the fact that much of English vocabulary is either Germanic or Latin in origin is that we have many instances of two different words that mean essentially the same thing—one each from these two different root languages. Few are exact synonyms, of course, but even given differing connotations, these words that cover similar semantic ground make striking pairs that highlight the unusual richness of the language: 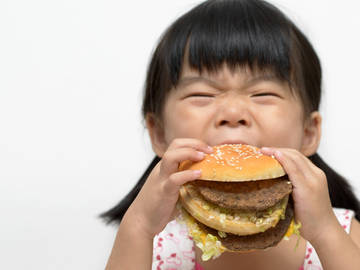 The noun is much more common, meaning “a large, glossy-black bird” that resembles a crow. It comes from an Old English word and its related adjective means “shiny and black” (as in “raven hair”). The verb means “to devour greedily,” “to prey” or “to prowl for food,” and, more figuratively, “to plunder.” It came to English through French from Latin.

When used in reference to feeding, raven is most often associated with wolf, as in “ravening wolf.” It is usually used of animals—even very small ones, if their potential for causing pain or damage is great:

When used to mean “to plunder,” raven is also applied to people:

I answer, that I believe all this about pillage, and ill-gotten treasure, and greedy ravening, is pure invention, not countenanced by any authority whatever.
— Samuel Roffey Maitland, Notes on the Contributions of the Rev, George Townsend To The New Edition of Fox’s Martyrology, London, 1841

In Middle French—that is, the language as it was used from roughly the 1300s to the 1500s—the verb raviner meant “to rush forward” or “to stream.” This sense was applied to water, and the word ravine meaning a “a small canyon usually worn by running water” came directly from it.

When not applied to water, raviner could mean “to rush” and “to take by force.” The oldest English word derived from this root is the archaic noun ravin, which means “plunder” or “something seized as prey,” and it also gives us ravenous, which went from meaning “devouring with voracious eagerness”—used of animals seizing another animal as prey—to meaning just “very hungry”; the notion of appetite has been retained over time without the notion of violence, such that ravenous is today welcome in polite company at dinner parties, unlike so many of its etymological cousins.

Ravin and ravine ultimately derive from the Latin word rapere, which is also the root of other English words that evoke violence of some kind: ravish, originally meaning “to seize,” “to plunder,” or “to rape,” the word rape itself, rapine (“pillage, plunder”), and rapacious, which can mean “living on prey” or simply “very hungry”—meanings that are very close to ravenous.

As rapacious and ravenous share basic meanings, so do ravish and yet another cousin, rapture. Ravish can also be used to mean “to remove from one place or state to another (as from earth to heaven)” or “to transport spiritually,” meanings perfectly congruent to the noun rapture. Rapt, usually used today to mean “engrossed” (as in “rapt attention”), originally meant “lifted up and carried away” or “enraptured.” This meaning of ravish, a change from one state to another, developed into “to fill with joy or delight” (“ravished by the scenic beauty”) and connects with the more commonly encountered adjective ravishing, meaning “very beautiful.”

So, although a raven could be described as ravenous, the words are unrelated. One could present a plausible case that ravens appear particularly avid or hungry when eating (though, in nature, it’s hard to imagine any animal that doesn’t). After all, crow is used to mean “to brag exultantly or blatantly” and magpie has been used as a verb meaning “to pilfer and hoard.” Since wolf is used as a verb based on its eating habits, why not raven? The simple answer is: etymology is based on linguistic history, not wishes.

Intriguingly, Shakespeare juxtaposed raven and ravening in Romeo and Juliet:

Did ever dragon keep so fair a cave?

Just opposite to what thou justly seem'st,

A damned saint, an honourable villain!

We don’t know whether Shakespeare conflated the etymologies or was just being cheeky (Will was often cheeky). Conflating the usage of some of these closely related words might be a more serious matter for us today, however: ravenous and ravishing aren’t interchangeable. You may send mixed messages—or at least be reasonably accused of confusing your appetites—if you use ravenous (“hungry”) to mean ravishing (“beautiful”). The fact that these words come from the same source but have developed to mean very different things shows that, for practical purposes, sometimes a word’s history is etymological water under the bridge.