The meaning of radical for many centuries was related to its origins radicalis meaning "root." Thus, until recently, radical referred to the roots of words, the roots of illness, or even square roots. Later, radical was used more figuratively to mean "fundamental" and examples like "radical reform" referred to changing the very root of the system. Now radical is associated with extreme change and deviation from the norm.

When you think of the word radical, what comes to mind? If politics is your thing, it might be an image of a person far to your ideological right or left. If math is your thing, you might think of square roots. If surfing slang is your thing, it's probably some beach bum saying something like "Radical, dude."

Ah, English: yet again, using the same word to do so many jobs. Just how did radical come to have so many, uh, radically different uses? And just what is its original use? You will not be surprised to know that we have some answers for you.

The Origin of 'Radical'

The origin of radical isn't at all radical, in the "very different from the usual or traditional" sense of the word. Radical was first an adjective, borrowed in the 14th century from the Late Latin radicalis, itself from Latin radic-, radix, meaning "root." And the earliest uses of radical are indeed all about literal roots, hinging on the meaning "of, relating to, or proceeding from a root." 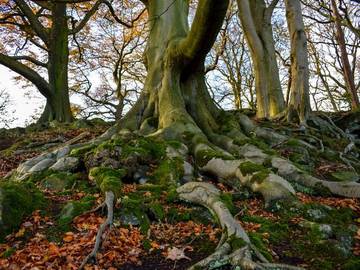 A tree's roots should probably not "hang loose," however.

None of this will surprise the botanists: they know that radical leaves grow from the base of a stem or from a rootlike stem, and radical tubers grow from a plant's root. And linguists know that a verb's radical form is its root form. In medicine, radical surgery is surgery that's designed to remove the root of a disease. And mathematicians and students of mathematics know that the radical sign—√ or √⁻—is used when you're finding the square root of a number or formula.

Root itself is a familiar element in metaphoric language—we talk about "the root of the problem," "putting roots down," "a family's roots"—and so perhaps radical was destined to develop figurative use too. Destiny or not, it did, and pretty much immediately: the Oxford English Dictionary reports its earliest example of the figurative use from the very same source as the literal one: John Trevisa's 1398 English translation of Bartholomaeus Anglicus's De proprietatibus rerum, an encyclopedia known in English as On the Properties of Things.

The Figurative Use of 'Radical'

In its first foray into figurative use, radical did what you'd expect: it functioned with a meaning of "of or relating to the origin; fundamental." This "fundamental" figurative meaning of radical was the dominant one for centuries:

These two great radical Vertues, Faith and Love, are the two Pillars, as it were, upon which the Frabrick of our Salvation is built: for nothing makes us the Sons of God, but such Faith as is accompanied with Love and good Works …
— John Godolphin, The Holy Arbor, Containing a Body of Divinity: Or, the Sum and Substance of Christian Religion, 1651

… I, for my part, scarce know a more contemptible people. There must ever have been both in their temper and government, some radical vice, by which they have been kept in a perpetual servitude.
— unattributed translation of Voltaire's The Philosophical Dictionary for the Pocket, 1765

The great and radical vice in the construction of the existing Confederation is in the principle of legislation for states or governments, in their corporate or collective capacities, and as contradistinguished from the individuals of which they consist.
— Alexander Hamilton, "The Insufficiency of the Present Confederation to Preserve the Union," The Federalist Papers, 1 Dec. 1787

In that point of excellence, Leonardo da Vinci was original; and it was the natural result of a mind like his, formed to philosophical investigation, and deeply attentive to all the variety of appearances by which the passions are marked in the human countenance and frame. These he traced to their sources: he found them in their radical principles, and by his knowledge of these principles, his expression of character became perfected.
— John Galt, The Life, Studies, and Works of Benjamin West, Esq., 1816

Now what a radical reversal of things this was; what a jumbling together of extravagant incongruities; what a fantastic conjunction of opposites and irreconcilables—the home of the bogus miracle become the home of a real one, the den of a mediaeval hermit turned into a telephone office!
— Mark Twain, A Connecticut Yankee in King Arthur's Court, 1889

Radical stepped into the realm of politics first in England in the late 18th century, when one Charles James Fox in 1797 called for "radical reform." "Radical reform" was to be fundamental reform, reform that made changes to the very root of the system, especially by pushing for universal male suffrage. The new use of the word caught on and moved across the pond and beyond suffrage:

As this is the first instance, we believe, in our country, in which a radical reform of the criminal laws of a state has been systematically and deliberately undertaken, we rejoice that the attempt was commenced under such favorable auspices.
— "Livingston's Penal Code of Louisiana," North American Review, October 1823

Noun use—supporters of parliamentary reform were known as Radicals—followed. As British Radicals worked to extend suffrage even to the working class (wow!), and then to organize new voters, the Whig parliamentary faction was being transformed into the Liberal Party (which was supplanted in 1918 by the Labour Party; more here). The Radicals had the loyalty of the trade unions because they'd gotten the members of the trade unions the right to vote.

The Modern Use of 'Radical'

And Lydgate's tendency was not towards extreme opinions: he would have liked no barefooted doctrines, being particular about his boots: he was no radical in relation to anything but medical reform and the prosecution of discovery.
— George Eliot, Middlemarch, 1871-1872

Dickens attacks the modern workhouse with a sort of inspired simplicity as of a boy in a fairy tale who had wandered about, sword in hand, looking for ogres and who had found an indisputable ogre. All the other people of his time are attacking things because they are bad economics or because they are bad politics, or because they are bad science; he alone is attacking things because they are bad. All the others are Radicals with a large R; he alone is radical with a small one. He encounters evil with that beautiful surprise which, as it is the beginning of all real pleasure, is also the beginning of all righteous indignation. He enters the workhouse just as Oliver Twist enters it, as a little child.
— G. K. Chesterton, Appreciations and Criticisms of the Works of Charles Dickens, 1911

And then at some point—specifically, the 1960s—the surfers showed up. The authoritative Green's Dictionary of Slang reports the "excellent, cool" use to have originated in surfer jargon but to have come from the "basic, essential, from the roots" meaning of radical.

And there you have it: the newest meaning of radical getting back to the word's roots. Pretty radical.