The first people to use the word quick did not have speed in mind at all.

The phrase "the quick and the dead" gives a clue about what they meant. This phrase is from the Bible's New Testament, where the Day of Judgment is described as the time when Jesus will return from heaven to judge everyone, both the quick and the dead, determining who will have eternal life and who will be damned. (The phrase has also been used as the name of various books and movies.) It's clear who "the dead" are. "The quick," meanwhile, is everyone else. That's right: quick originally meant "not dead"—that is, "living, alive." 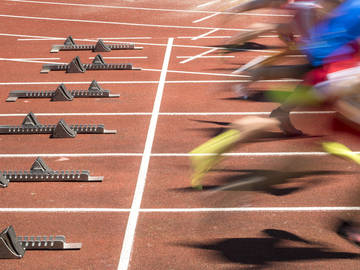 Scene from a gym class: the quick and the wish-they-were-dead

The word traces back to the Old English cwic, and shares an ancestor with the Latin words vivus and vivere, meaning respectively "living" and "to live," as well as with the Greek bios and zōē, meaning "life." Its original meaning is evident in a few other modern uses as well, such as quicken when it's used to mean "to reach the stage of gestation at which fetal motion is felt." (Quick itself also has an archaic meaning of "pregnant.")

Note that while the noun use of quick to mean "living beings," as in "the quick and the dead" shares an origin with the first adjective use of quick to mean "living," the noun quick that refers to the painfully sensitive area of flesh under a fingernail or toenail is related far more tenuously. It's believed to be from a Scandinavian root that is only a cousin to the Old English cwic.