To Use or Not Use the "?" in Requests

"Would you read this, please." (Wait, where's the question mark?)

Boss: Can you include this week's numbers in the report for this morning's meeting.

Boss: Also, could you make 18 collated copies of it.

Depending on time and workload, you might be tempted to respond with "since you ask, I'm actually a little slammed right now"; however, because you're a model employee, you comply. You also probably noticed the terminal periods where one might expect a question mark, and (perhaps after an initial bolt of worry that someone was mad at you) realized these were not questions but rather directives given in a polite manner. Your boss does, in fact, expect an affirmative response followed by a revision and 18 copies in hand, pronto—in other words, it's less of an ask and more of a tell. 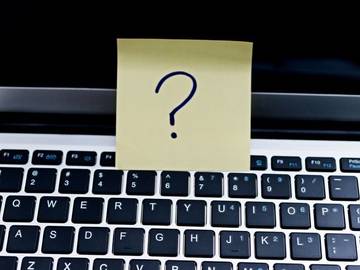 Grammatically, the boss's requests are imperatives, statements that express a command or order. The phrasing of the imperative as a question is a convention of common courtesy—it is certainly nicer to ask someone to do something rather than tell them to do it. At Merriam-Webster, "Proofread these pages" never breaks the library-silence of the editorial floor; however, "Can you please proofread these pages" can often be heard coming from slightly croaky voices unaccustomed to use.

Typically, the "imperative incognito" begins with a modal verb—e.g., could, can, would, will, and may, all of which indicate a polite request—and reads as a question until the end, at which a single dot is placed, changing the meaning of the preceding words into a command.

Can you please turn off your cellphone.

Would you kindly fill out this form.

Will you please sit down.

May I have your attention, please.

If a writer wants to retain the nicety of a question when stating an imperative, adding a question mark will do. The mark completes the statement as a "yes/no" question, giving the person being addressed an option of responding with "no" or "sorry, I can't." In most cases, that probably won't happen; however, it's nice to have given the person a choice (especially when that person may truly not be able or willing to carry out the request). In the end, the "yes" person will likely fulfill the favor, request, order, etc., whether out of courtesy or obligation.

For those who find disguising an imperative as a question a bit too unconventional—but who also want to make a polite request that conveys a sense of expectation of fulfillment—traditional, grammatically correct questions or statements will still get the job done (though in a wordy fashion). Just be sure to use modal verbs of politeness and the magic word please.

Would you be able to have the report ready for this morning's meeting?

I would appreciate it if you can have the report ready for this morning's meeting.

Please have the report ready for this morning's meeting.