The vocabulary of keeping some distance

When discussing the spread of disease, isolation refers to separating sick individuals from society in order to contain the spread of the illness. Quarantine refers to separating and restricting the movements of healthy individuals who may have been exposed to an illness to determine whether they are sick (and would require isolation). Isolation has roots in the Latin word for "island," and quarantine has origins in the French for "forty" or "a forty day period."

When societies are faced with infectious disease, the principle of separating sick people from the rest of the population has been known and practiced long before the causes of the diseases were known with scientific certainty. Indeed, against the plague of the 14th century in Europe known as the black death, no medical treatment was possible; eliminating the chance of exposure was the only effective public health strategy. 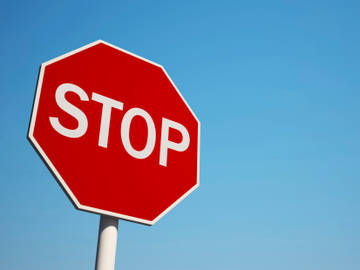 Initially, the French word 'quarantaine' (“about forty”) was borrowed with the meaning “a period of forty days.”

The Origin of 'Isolation'

The first permanent hospital for treating plague victims was established in Venice in 1423 on a nearby island called Santa Maria di Nazaret. The hospital was initially referred to as nazaretto, a term based on the name of a biblical location for which the island was named, Nazareth, that was then blended with the biblical name Lazarus to become lazaretto, meaning “a hospital for those with contagious diseases.” Lazzaro (based on Lazarus) was the Italian term for “leper.”

The hospital’s location on an island is a vivid and relevant example of the root of the word isolation, which ultimately derives from the Latin word insula, meaning “island.” The word’s path from Latin to English also begins in Italian, with the word isolato (“isolated”), that became the French word isolé, and then moved into English. Early uses of the term in English were spelled in the French manner with a conventional English modifier marker d as isolé’d before it settled as the spelling isolated.

The reason the lazaretto was on an island was to isolate the patients; etymologically, the word isolated means islanded. A verb was subsequently coined to correspond to this adjective, which is how we got isolate in English through the process of back-formation. Given its Classical roots, isolated is a relatively new word in English, only dating to the late 1700s:

That philosophy is very narrow that gives, for the cause of Jewish isolation, the strict inhibition of Moses against idolatrous practices. Idolatry has ceased, but they are still isolated.
— Isaac Disraeli, Vaurien: or, sketches of the times, 1797

This entire isolation of the place where the small-pox breaks out, such as the laws of Virginia prescribe, cannot be carried into effect with all the conditions necessary to render it salutary.
— François Alexandre Frédéric de La Rochefoucauld, Travels through the United States of North America, 1799

The Origin of 'Quarantine'

The intersection of Italian and French influences also contributed to the introduction of the word quarantine in English. Initially, the French word quarantaine (“about forty”) was borrowed in the late 1400s with the meaning “a period of forty days,” yet another biblical reference, originally referring to the period of time Jesus spent fasting in the desert. It came to have a broader application to a period of forty days that had religious significance, such as penance, or the delay of implementation of a legal agreement. Then, in the early 1600s, the meaning “isolation of a ship to protect the port city from potential disease” began to be used in English, from the Italian word quarantena, which had been used in this way since the 14th century. Since the French form of this cognate word was already in use (indeed, a variant form was the more French-looking quarantain), the new “isolation as protection from disease” sense became a new use of the existing word quarantine. It was now an English word based on French spelling with an Italian definition and Latin roots.

Indeed, that ultimate Latin root for these words, quadraginta (“forty”), is also the root of the words for Lent (“the 40 weekdays from Ash Wednesday to Easter”) in the Romance languages: Carême (French), Cuaresma (Spanish), and Quaresima (Italian). The current practice of 14 days of quarantine has more to do with modern medicine than with any etymological connection to the Latin root of "four"; that fourteen and forty are similar is just a coincidence of epidemiology and etymology.

An interesting footnote to the etymology of quarantine is that the French word that English borrowed is part of a pattern for nouns that stand for numbered groups in French, meaning "about forty," "about ten,” etc., which uses the -aine ending:

One of these has been borrowed into English:

Which gave us dozen. It’s notable that, for whatever reason, English never adopted the full pattern for identifying groups by approximate numbers in this way, notwithstanding the fact that dozen has proved to be a useful term for both general figures (“about a dozen years ago”) and specific counts (“a dozen eggs,” “a baker’s dozen”). But even if English doesn’t possess this convenient linguistic measure for groupings, when it comes to the group effort needed to protect ourselves from disease, we’re all in this together.

The Difference Between 'Quarantine' and 'Isolation'

The current use by medical professionals distinguishes isolation and quarantine in exactly the way that the terms were originally created: the U.S. Department of Health and Human Services indicates that:

Isolation is used to separate ill persons who have a communicable disease from those who are healthy.

Quarantine is used to separate and restrict the movement of well persons who may have been exposed to a communicable disease to see if they become ill. 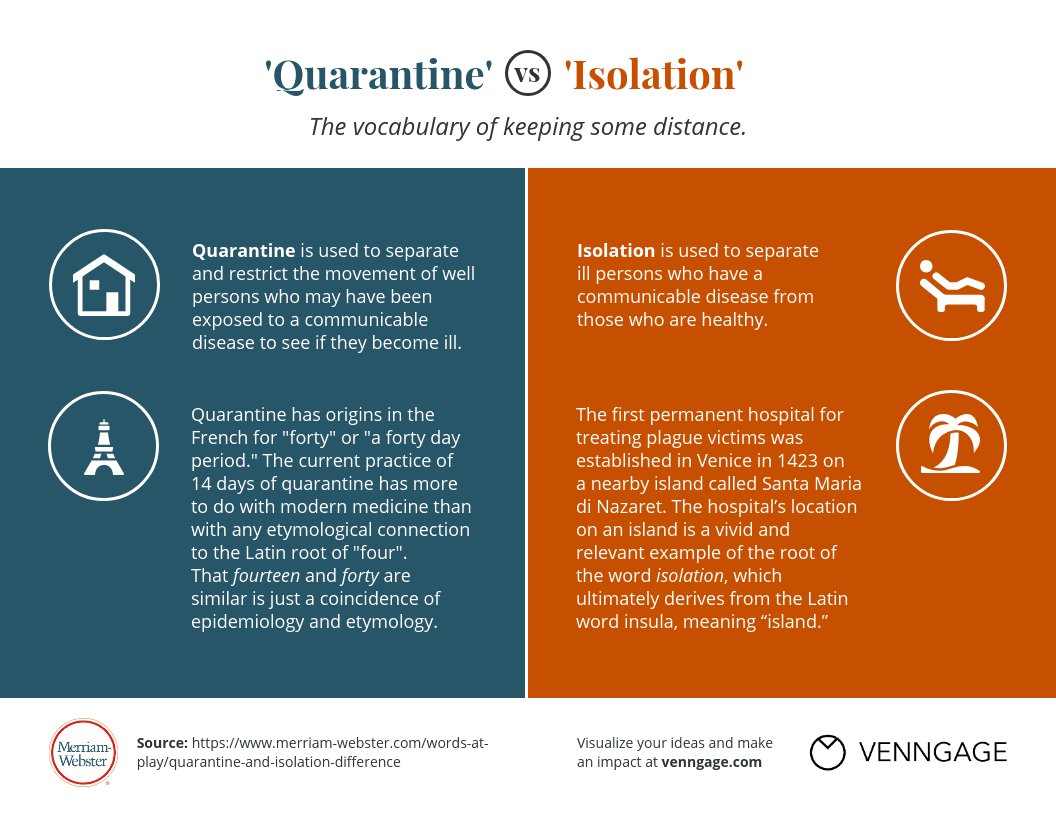