What is a 'Pyrrhic victory'?

It'll cost you nothing to read.

A pyrrhic victory is a victory that comes at a great cost, perhaps making the ordeal to win not worth it. It relates to Pyrrhus, a king of Epirus who defeated the Romans in 279 BCE but lost many of his troops.

It is likely that most of us prefer to win at something, rather than to lose. And it is also likely that most of us have at some point or other achieved a victory, and, rather than reveling in our success, have had to ask ourselves some variation of ‘I’ve won … but at what price?’ If you have achieved a win at excessively great cost you are familiar with the Pyrrhic victory. 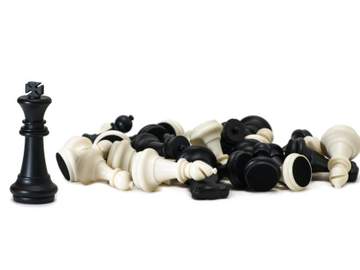 We hope that you have just had regular victory victories.

The Origins of 'Pyrrhic Victory'

We define Pyrrhic victory as “a victory that is not worth winning because so much is lost to achieve it.” The word comes from the name of Pyrrhus, a long-ago king of Epirus, who suffered heavy losses in defeating the Romans at Asculum in Apulia in 279 B.C.E.

Pyrrhic first came into use as an adjective, in the late 17th century, with the meaning of “of, relating to, or resembling that of Pyrrhus.” In its earliest use it was used in reference to the war waged by the king.

The Generous Brutus her Infranchiser,
Papyrius, who reveng'd the Pyrrhick War;
Stayd Curius, and Fabricius, a stern Pair!
Marcellus, who the third rich Trophies bare
And Cossus Second, from Kings spoyl'd of Life.
— Edward Shelburne, The Sphere or Marcus Manilius, 1675

In the early 19th century Pyrrhic began to be paired with victory, and the two words took on the specific meaning of ‘victory achieved at excessive cost.’

He ought, however, to take a hint from Mr. Bulwer’s felicitous allusion to the fate of those who, rather than recognize the principle of Parliamentary Reform, preserved Gatton, and by this Pyrrhic victory, accomplished the great measure of 1832.
— The Morning Chronicle (London, Eng.), 4 Jun. 1836

Last year the Whig majority on joint ballot was very large; now, the Whigs claim, with sufficient probability too, a majority; but it is one of those Pyrrhic victories that indicate a final overthrow.
— The Wetumpka Argus (Wetumpka, AL), 20 Nov. 1839

At the same time Pyrrhic was often frequently used with triumph, a pairing that has not survived to the extent as victory.

Yet they made a gallant rally, and if their numerical force in the House of Commons were not equal, Sir, to your moral energy, the return of Lord Melbourne at the best was but a Pyrrhic triumph.
— The Standard (London, Eng.), 27 Jan. 1836

Yet was it no victory to the other side,—or at best one of those Pyrrhic triumphs that are worse than defeat.
— The United States Magazine (New York, NY), Sept. 1838

We also provide an entry for Pyrrhic with no victory, and define it as “achieved at excessive cost” and “costly to the point of negating or outweighing expected benefits.” While Pyrrhic is most often found modifying words such as victory, the word appears to be spreading in use, and is increasingly used as an adjective slightly removed from victory, or modifying other words.

But with the developer threatening to open the mall just a few miles down the road in West Valley City, Anderson’s victory last year seemed Pyrrhic at best.
— The Salt Lake Tribune, 6 Jul. 2001

Even Republicans are showing interest, Howell says, figuring that a vote for a Libertarian form of smaller government is better than a Pyrrhic gesture for the floundering Robinson effort.
— Brian MacQuarrie, The Boston Globe, 1 Oct. 2000

It is worth noting that we enter Pyrrhic, as relating to questionable victories and King Pyrrhus, in capitalized form, but there is another entry for the word, in which case it is not capitalized. “A metrical foot consisting of two short or unaccented syllables” is the definition of pyrrhic, a word that comes from the Greek word pyrrhichē (a kind of dance).