It's, ahem, an illuminating story.

If you're in the limelight, you're at the center of public attention. When you're royalty, you might have to get used to it:

Prince William and [Kate] Middleton are entitled to a certain amount of privacy. And after a whirlwind 2018 in the limelight—what with Prince Harry's engagement, the Queen's birthday, and a new baby, for starters—it makes sense that the new parents would take some time for themselves at home.
— Sophy Ziss, Bustle (bustle.com), May 2018

But the original limelight wasn't for royalty. It was for anyone who managed to get into the sweet spot on a theatrical stage: front and center, in the warm glow of literal limelights. 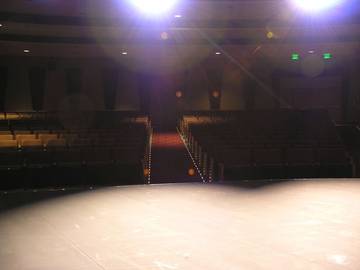 The word 'spotlight' occupies a similar territory, functioning as both a noun and a verb.

Limelights were the first theatrical spotlights. They consisted of a cylinder of lime (technically calcium oxide) onto which an oxyhydrogen flame was directed. A lens was usually used to concentrate the light in a beam. Limelight was invented in 1816 by Thomas Drummond but wasn't adopted widely for use in theaters until the 1860s. (Drummond wanted his invention to provide safety to boats traveling dark shorelines, but limelight proved to be too expensive and dangerous for lighthouse use.)

By the early 20th century, the evocative term was moving into its now-familiar extended use:

Though a Parisian, she might be a Roman of the Campagna, where the Latin type is best preserved; has no wish, nor ever had, to stand in lime-light.
— The Indianapolis Journal, 5 April 1903

That innocent réclame of his, that irresistible passion for the limelight which was forever drawing off the forces that ought to have been invested in his work, was due largely, no doubt, to his inordinate desire for approval, for self-corroboration.
— Van Wyck Brooks, The Ordeal of Mark Twain, 1920

Limelight was eventually replaced with electric lighting, which didn't require the near-constant attention of someone tasked with adjusting the burning calcium oxide and tending to the cylinders of gas that fueled that burning, but the word has stuck around, and phrases like "into the limelight" and "staying out of the limelight" remain common. Though not so common as the noun, limelight has for more than a century also been used as a verb:

It pleased and flattered "the younger generation" to be so studied, so limelighted, so accused, and they were disposed very naturally to make the most of their moment of spot-light importance.
— Hamlin Garland, Back-Trailers from the Middle Border, 1928

Not content to remain confined to the stage, limelight also made its way to the silver screen: Charlie Chaplin's movie "Limelight" (in which Buster Keaton also stars) came out in 1952 and tells the story of a sad clown, played by Chaplin, whose days in the literal and figurative limelight are depressingly far behind him until he's inspired by the young ballerina (played by Claire Bloom, not Keaton) he rescues from suicide.

The word spotlight (which dates to the early 20th century) occupies the same semantic territory as limelight, with a literal limelight being a kind of spotlight. Figuratively, spotlight also functions as both noun and verb:

A gifted athlete with an entertainer's hunger for the spotlight, Lemon, who dreamed of playing for the Globetrotters as a boy in North Carolina, joined the team in 1954, not long after leaving the Army.
— Bruce Weber, The New York Times, 28 Dec. 2015

To spread the news of the nation-wide project, Google is spotlighting small businesses in a series of video shorts.
— By Nikki Delamotte, Cleveland.com, 11 May 2018

Either word is good for focusing attention.