‘Pushing the Envelope’: Don’t Mail It In

The outer limits of an idiom.

To push the envelope means to surpass normal limits or attempt something viewed as radical or risky. It comes from the aeronautical use of envelope referring to performance limits that cannot be exceeded safely. The phrase was originally limited to space flight, before spreading to other risky physical accomplishments, and finally metaphorically to any boundary-pushing activity, such as art. 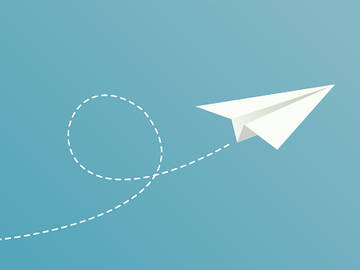 The phrase push the envelope means to go beyond normal limits and to try out a new and different idea that is often viewed as radical or risky.

Piccininni is the newest member of the Yonder Mountain String Band that’s been redefining bluegrass music by pushing the envelope into realms of rock n’ roll and improvisation.
— The Utica Observer-Dispatch, 7 May 2020

The noun envelope might be most commonly understood as an item of stationery in which other items can be enclosed (as for mailing), but there are a number of other senses of the word—many from science—that involve enclosure. These senses include “the outer covering of an aerostat,” “the bag containing the gas in a balloon or airship,” “an enclosing membrane,” or “a curve or surface tangent to each of a family of curves or surfaces.”

Like the related verb envelop, envelope derives via Middle English from the Anglo-French envoluper, envoleper, formed by combining en- (“in”) with voluper (“to wrap”).

The sense of envelope that gave us push the envelope does not come from stationery, even though it might convey the image of someone sweetening an offer (as in a negotiation) by pushing an envelope across a table to another person. Rather, the envelope in push the envelope comes from aeronautics, where it refers to a set of performance limits that may not be safely exceeded.

The last requirement was to determine weight and balance--the center of gravity (CG) envelope of the plane. This involves actually weighing the aircraft using three scales—one under each wheel—and calculating the envelope, which determines the maximum weight we can add at locations fore or aft of the CG line-in this case, the leading edge of the wing. A plane that is loaded outside of the envelope will be unstable-and probably uncontrollable-in the air.
— Popular Mechanics, September 1997

“I always felt that the risks we have in the space side of the program were probably less than we had back in flying at Edwards or the general flight-test community. The reason is that we were exploring the frontiers, we were out at the edges of the flight envelope all the time, testing limits. …”
— Neil Armstrong, in First Man: The Life of Neil A. Armstrong, 2005

Spread of "Pushing the Envelope"

The phrase was used with some frequency within the fields of space flight and aviation, but it found its way to general audiences when it appeared in Tom Wolfe’s 1979 award-winning nonfiction novel The Right Stuff, about the Mercury Seven astronauts as well as other test pilots of rocket-propelled aircraft, most notably Chuck Yeager.

Yeager had been the first rocket pilot to go through this particular hole in the supersonic envelope, and it was during the flight in the X-1A in which he set a speed record of Mach 2.42.
— Tom Wolfe, The Right Stuff, 1979

In that book, the actual phrase used is push the outside of the envelope:

In a way they could not have associated with anyone else, at least not easily, because the boys could talk only about one thing: their flying. One of the phrases that kept running through the conversation was “pushing the outside of the envelope.”
— Tom Wolfe, The Right Stuff, 1979

The condensed version push the envelope appeared concurrently in other media:

At 400,000 feet, the shuttle was dropping fast above the Pacific. Since it had no maneuvering power, the spaceplane had to land right the first time. But even after the shortened flight, Columbia had enough bravado left to "push the envelope" one more time.
— Sharon Begley et al., Newsweek, 23 Nov. 1981

The Right Stuff was made into a 1983 feature film starring Ed Harris, Sam Shepard, and Dennis Quaid, and the phrase is repeated in iterations throughout the film. As Wolfe explained to William Safire in 1988, the term envelope carried the idea of enclosure: “They were speaking of the performance capabilities of an airplane as an envelope, as if there were a boundary. Why they chose envelope, I don't know, but if you get outside the envelope, you're in trouble.”

With envelope suggesting a boundary of safety, push the envelope saw increased use as a phrase for ratcheting up the risk of an activity.

Marathoners work their bodies hard. So do triathletes and those who make their living playing sports. But nobody pushes the envelope of human endurance quite as far as extreme racers. Burning calories and shedding electrolytes faster than their bodies can replace them, athletes like Rusch will lose up to 10 lbs. of water, fat and muscle in the course of a five-day race. By the time Rusch crosses the finish line, her organs are faltering, her muscles are deteriorating, and she's hallucinating wildly.
— Alice Park, Time, 6 June 2005

Metaphorical Use of "Pushing the Envelope"

But metaphorical pushing the envelope was less often about physical danger and more about artistic risk, putting forward new and radical ideas that might not be immediately embraced—the cutting edge, so to speak, to use another term that employs the language of borders.

Before he talked to Wolfe, Safire himself had already taken to the metaphorical use of the phrase in his own writing:

Advertising copywriters have turned into attributive-noun freaks because the construction enables them to put the name of the product in a new linguistic function. (Noun freak uses the word noun as an attributive noun modifying freak, probably for the first time in the history of the English language. We really push the envelope in this space.)
— William Safire, The New York Times Magazine, 1 June 1986

Nowadays a good deal of political thought is stolen from those student-free colleges we call ''think tanks.'' Free from the pressures of a student body or ousting by an irate electorate, scientists in these institutions of highest learning push the envelope of our polity.
— William Safire, The New York Times, 1 Sept. 1986

Metaphorical push the envelope continued to broaden in use over the subsequent decades:

[M]ost of the 600 fortunes on Tong's computerized master list tend to be as bland and inoffensive as a bowl of white rice. … But a special order … That's when Tong gets to push the envelope of fortune cookie-writing. "I think one of my favorites is `You will catch your mate answering a personals ad,' " she says, reading from a list of fortunes she wrote for a friend's party.
— Mike McIntyre, The San Diego Union-Tribune, 25 Aug. 1987

Bernard is at his stubborn, cynical best, exhibiting his trademark biting wit and subtle disregard for the rules as he pushes the envelope in his quest for the truth.
— Emily Melton, Booklist, 15 Oct. 1996

"Malcolm" was the most-watched comedy on TV among people 18 to 49-more than "Frasier." Suddenly people are talking about a sitcom revival. "They're pushing the envelope, not going with the banal shows other networks have," says Marc Berman, a programming consultant.
— Marc Peyser, Newsweek, 31 Jan. 2000

Now pushing the envelope comes with its own risks, but you don’t need a pilot’s license to do it.