Sometimes when we look at a word there is a tendency to assume that its history must be relatively pedestrian and commonplace. Especially when said word is composed of readily-understood elements, such as punchable. Somewhere back in history the committee that creates new English words (aka 'the English speaking people') must have decided that if something is able to be punched it should henceforth be called punchable, right?

While that is true, in some extremely limited way, it overlooks all the interesting aspects of the history of punchable. And this particular word's history involves financial shenanigans, ribald Georgian-era slang, and the kind of person whose phiz cries out for a fist to the kisser. 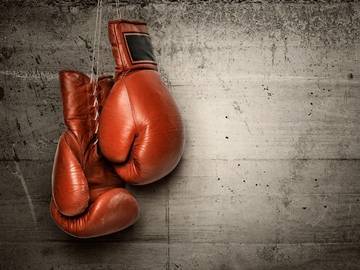 We're playing all the hits.

The story starts with money. At the end of the 17th century, silver coins in Great Britain were in a sorry state, largely due to the fact that silver was worth money, and people were in the habit of taking little bits and pieces off the coins (known as clipping and rounding). An act was passed which required coins that had been made the old-fashioned way (with a hammer), and which were unclipped and still legal tender, would have to be struck through with a punch.

And in regard that such coins of the realm, formerly made with the hammer....would still be most liable and subject to the pernicious crime of clipping and rounding by wicked persons....for the better prevention thereof it was further enacted, that every person having such unclipped monies in his possession, should, before the 10th day of February 1695, or before he disposed of the same, cause them to be struck through, about the middle of every piece, with a solid punch that should make a hole without diminishing the silver.
— Rogers Ruding, Annals of the Coinage of Great Britain, 1840

Almost immediately after this act passed people adopted the word punchable to refer to coins that had not been clipped.

...it is true they have been required to make their Demands in Gold or Silver, either mill'd or punchable, but of 200 protests drawn they have not observed above ten sent away.
— Minutes of the Proceedings of the Lords Justices of England, 5 Jun. 1696.

They saw, how by a false Gloss upon the Words of the Act of Parliament, relating to Punchable Money, a new Currency was growing upon us for diminish'd Shillings and Half-Crowns also.
— John Locke, A Review of the Universal Remedy for all Diseases Incident to Coin, 1696

On Thursday last, Mr. Henry Legat....he saw a Man and a Woman sitting, and riding up to them, they rise, and she being a likely Woman, he said you are Punchable Madam, according to the Act of Parliament; he took no notice of the Man, thinking him to be one Blockhead...
— Post Boy (London, Eng.), 5-8 Sept. 1696

The careful reader will note that the last of the citations above appears to use punchable in a manner that differs somewhat from the first two. For while the English-speaking people are apt to create magisterial and solemn vocabulary, they are also ready and willing, at a moment's notice, to attach the occasional vulgar sense to a word. And so shortly after punchable was used to describe monetary matters, it began to also describe feminine sexual availability (or, as Francis Grose phrased it in his 1795 A Classical Dictionary of the Vulgar Tongue, "A girl that is ripe for man is called a punchable wench"). It's a small blessing there wasn't an Internet back then. In some cases punchable was employed in a more modest sense, meaning simply that a woman was ready for marriage.

...for a Cup on the best Beer made her Daughter's Modesty Punchable, and that now the Piffle-wasted Jade was grown as Pot-belly'd, as if she had not above a Month or two to reckon.
— Edward Ward, The Secret History of Clubs, 1709

....the Daughters doubted not of rich Husbands, as soon as they were punchable....
— Alexander Smith, The Comical and Tragical History of the Lives and Adventures of the Most Noted Bayliffs in and About London, 1723

The saucy sense of punchable diminished as the 18th century passed into the 19th, and the original sense of the word began to be applied to things such as train tickets.

A commuter suggests that there is only one way to stop scalping, and that it to make it unprofitable, by making the single-trip fare 10 cents, and round tickets 15 cents, and arranging commutation tickets to that they will be punchable on both sides of the bay....
— San Francisco Bulletin, 2 Mar. 1887

At the end of the 19th century punchable shifted its "capable of being punched" sense to apply to a different kind of punch. Instead of referring to "a hole or notch from a perforating operation," the new sense of the word related to a blow, as when struck by a fist.

And, the peeler possessing a punchable chest, our hero most recklessly went for it.
— The Sporting Times (London, Eng.), 28 Apr. 1888

Now, the only spot where a capitalist concern IS punchable is its political side; accordingly, only to the end of giving a political punch is unity of purpose possible.
— The People (New York, NY), 27 Aug. 1899

If it is considered by the Camden police a punchable offense to criticize Roosevelt the fact should be made known to the public.
— Montgomery Advertiser (Montgomery, AL), 13 Jan. 1908

The most common use of punchable in modern parlance is slightly different, now being used to mean "deserving of or inviting a punch."

You can break travelers down into categories. These are the travelers you and I would like to punch in the mouth. We would like to do this because they go places we can't afford to go to. We can't afford the time or the money, but they (travelers with punchable mouths) seem to have enough of both for all of us.
— The State (Columbia, SC), 8 Jun. 1966

As a dictionary we have no opinion on matters such as what constitutes whether someone is punchable or not. As with beauty, it tends to be personal to the eye of the beholder. So please do not write to us and ask that we place some specific person's image next to the definition of this word. We define your language; you define your animus.