What's the Correct Pronunciation of 'Clinton'?

And what's a 'glottal stop'?

The name of a presidential candidate is spoken many, many times during an election year. What doesn’t happen every election year is that a candidate’s name is frequently pronounced in two different ways. 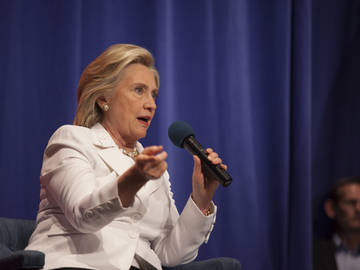 The t in Clinton is sometimes articulated clearly and sometimes swallowed. Linguists call this coexistence of different forms “free variation.” Both pronunciations can be used by a single speaker, even during the same stream of speech. It is not a regional variation and has nothing to do specifically with the name Clinton. For example, we may pronounce the word winter with both the n and t, or may just pronounce the n, eliding the sound \t\ so the word sounds just like winner. Or we may say cat without completely releasing the final t, so that the t is barely heard. Or the th in with may or may not be voiced, or pronounced with or without the vibration of your vocal cords (the difference in the initial sounds of there and therapy).

In the case of Clinton, the variant is whether we clearly articulate both the n and the t as distinct sounds or whether the t is pronounced as a glottal stop—the sound of tt in bottle, as some British speakers say it, with a short gap of silence between the two syllables. Interestingly, in the audio files for two of our online dictionaries, what appears to be the same voice recorded Clinton both with the articulated t and with a glottal stop. The same speaker in the same situation (sitting in front of a microphone) used two different pronunciations. Unsurprisingly, the clearly articulated pronunciation is more frequently heard by news announcers and people speaking in public, whereas the glottal stop version is more frequently heard in everyday speech, and Hillary Clinton herself uses the glottal stop when speaking her own name in public.

Another president’s name shares some qualities of Clinton but does not exhibit free variation: Carter is nearly always pronounced with what linguists call a flap, or the sound \d\ where the spelling uses t (most Americans pronounce ladder and latter the same). Both names have two syllables and both have a t preceding an unstressed syllable.

At least we can say that, even during an election year, there are some issues that don’t require us to make a choice.