Principal as an adjective means "the most important." As a noun, it refers to someone in a leading position, or the executive officer of a school. Principle, on the other hand, can only be a noun, referring to "a fundamental truth," "a code or law," or "an underlying quality that motivates one's behavior" (as in "following one's principles"). To help keep these words apart, remember: the principal is your "pal." 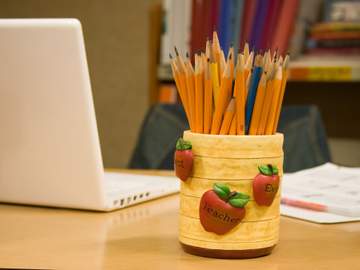 Please report to the lexicographer's office.

Every usage guide, every peeving handbook on spelling, and one out of approximately every eight web pages in general has some sort of exhortation to not confuse principal and principle, and yet still people routinely misuse these two words. Attempts at distinguishing between them have included mnemonics both silly and serious, detailed explanations of etymologies and parts of speech, and various forms of mockery.

These words both come from Latin, and have similar histories. Each may function as a noun, but only principal also functions as an adjective. Principal, as an adjective, most often means “most important, consequential, or influential” (as in “the principal ingredient of the dish is, unfortunately, anchovies”). When found as a noun, principal has a wider variety of meanings, including “a person who has controlling authority or is in a leading position,” “the chief executive officer of an educational institution,” “a leading performer,” or “a capital sum earning interest.”

Principle also has a variety of possible meanings as a noun. These include “a general or fundamental truth,” “a governing law of conduct,” and “underlying or basic quality that motivates behavior or other activities” (as in “such principles of human nature as greed and curiosity”). Again, principle differs from principal not only in meaning, but in that it does not function as an adjective (principled is the adjectival form of principle).

We will now take a moment to show a number of examples of mistaken use of these words by well-regarded publications, just to make you feel better about having made the same mistakes yourself.

I think Maigret's principle occupation would have been to understand why it happened, why she killed him, why it was necessary to go so far.
— Chicago Tribune, 10 Jul. 2002

In an attempt to understand the market’s current volatility, I go back to certain historical facts and revisit some of the basic principals of investing.
— The San Francisco Examiner, 25 Aug. 2007

It works on the simple principal that a liquid always finds its own level.
— The New York Times, 21 Jan. 2001

How to Remember the Difference

We will next provide a short list of some mnemonics that have proved to be useful in remembering the difference between these words.

1. The principal is my pal. This serves to remind you that principal may be an actual person, who may be your friend.

2. The principal is not my pal … I detest this man with every fiber of my being, and consider him a suppurating pustule on the sordid underbelly of the educational system. This serves to remind you that principal may be an actual person, who may not be your friend.

3. Principle, like rule, ends in “l-e.” This serves to remind you that principle and rule both end in le.

5. Principal has an A at the end, and is quite similar in spelling to the third word of Philosophiæ Naturalis Principia Mathematica, Isaac Newton’s three-volume work, which is widely considered one of the principal mathematic treatises of the past several hundred years. This serves to remind us that Isaac Newton was fluent in Latin.

6. Principle (meaning ‘code’ or ‘law’) is spelled differently than principal (meaning ‘most important’ or ‘person or thing of great importance’). This serves to remind us that these are two different words, with different spellings and meanings. It also serves to illustrate that different mnemonics work in different ways for different people, and you should find something that works for you, without consideration of what works for other people. It also serves to illustrate the fact that we all have some degree of difficulty with certain aspects of the English language (some of us confuse principal & principle, while others mix up amuse & bemuse), and these minor problems with spelling should not be taken too seriously, or worried about overmuch.