It's a great story. But that doesn't make it true.

One of the most common questions we receive goes like this:

I was looking up the etymology of 'posh', and you say its origin is unknown, but you're wrong. Everybody knows 'posh' stands for "port out, starboard home." 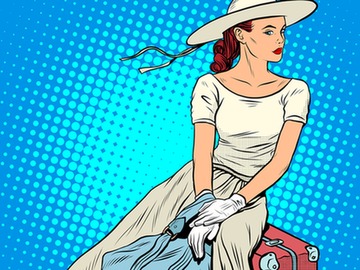 Supposedly, 'posh' stands for "port out, starboard home." There's only one problem—we have no evidence to back that story up.

For those who don't know the story, here it is: on ocean voyages between Britain and India, the most desirable cabins—the ones that didn't get the afternoon heat—were on the port side out and on the starboard side home. These luxury tickets were supposedly stamped with the letters POSH: posh.

This is a great story. It's tidy, it's historical, and it conjures up pictures of women in bustles and skirts swooning onboard ships. And it's an acronym! Who doesn't love an acronym! Great story! But that's all it appears to be.

It's not that we don't like this etymology—it's that we have no evidence for it. We have seen no tickets stamped with POSH; we've found no magazine articles talking about this fashionable mode of travel. Here's what we have found: posh entered the English language early in the 1900s, in a wholly un-nautical context, to mean "smart" and "stylish." Try though we might, we can't find any definitive information on its origins.

But if you find an old transoceanic ticket in your attic that's stamped "POSH," let us know.