The plural of bus is buses. A variant plural, busses, is also given in the dictionary, but has become so rare that it seems like an error to many people.

Nevertheless, buses is problematic: it looks like fuses, but doesn’t rhyme with it. Abuses doesn’t rhyme in two different possible ways: the noun with the \s\ sound or the verb with the \z\ sound. Words that do rhyme with bus are usually spelled with a double s, like fusses or trusses. 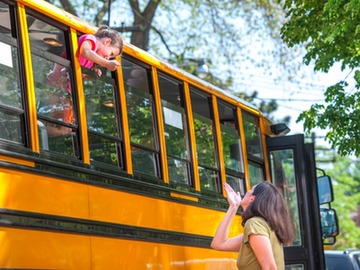 Until 1961, 'busses' was the preferred plural of 'bus' in Merriam-Webster dictionaries. But the word 'buss' is a synonym of 'kiss'. Perhaps it's just as well that 'buses' took over.

Confusing the issue is the word buss, a synonym of kiss which could make for some funny interpretations of parking signs for buses. Buss meaning “kiss” seems to have evolved from the sound of giving a kiss, whereas bus meaning “a large vehicle for carrying passengers” is an abbreviation of omnibus, their original name, from the Latin word meaning “for all.”

When the word bus was new, the two plurals were in competition, but buses overtook busses in frequency in the 1930s, and today is the overwhelming choice of writers and editors. Busses was the preferred form in Merriam-Webster dictionaries until 1961.

As for the verb bus—which may mean either "to transport someone in a bus" or "to remove dirty dishes from [as from a table]"—we do recognize bussed and bussing as variants. But the decision to buss a customer's table could cost you your job.