In ancient times, it was relatively easy to say what was a planet and what wasn’t. When you looked up at the night sky, some of the stars would stay in place over time, while others would wander around—and after all, the word planet itself comes from the Greek word for “wanderer.” So anything that moved against the background of the fixed stars was considered a planet—the sun, the moon, Mercury, Venus, Mars, Jupiter, and Saturn. 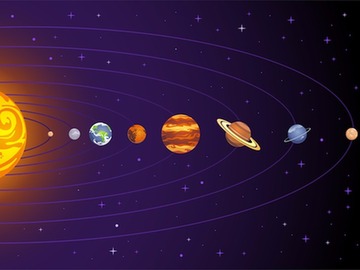 Pluto is spherical and orbits the sun, but is not big enough to disturb other objects from its orbit.

Much later, as astronomy became more of a modern science, the definition of planet changed accordingly. In the 17th century, planet began to be used specifically of the large rocky or gaseous bodies that orbit around the sun—a definition which excluded the moon and, obviously, the sun, but now included the Earth and, as they were discovered, Uranus, Neptune, and Pluto. Although a bit more complicated than “one of the moving stars,” this was still a relatively simple, reliable definition, and remained useful for several centuries.

However, as we moved into the 21st century, the increased power of telescopes and other detection techniques made the issue more complicated again. Ten years ago, in 2006, in response to the discovery of a number of additional astronomical bodies in the outskirts of our solar system, the International Astronomical Union decided on a new, even narrower definition of planet: a celestial body that orbits the sun, is large enough to form a spherical shape under the influence of its own gravity, and heavy enough to deflect any other bodies in its orbit. In the process, Pluto was demoted to the status of a dwarf planet—a celestial body that is spherical and orbits the sun but that is not big enough to disturb other objects from its orbit. Although not without a bit of controversy, these new definitions have been generally accepted by scientists and public alike.