An Effective History of 'Placebo'

The active ingredient is knowledge.

A placebo is used in medical trials as a control against active medications. Even though a placebo has no active ingredients to cause a positive effect, it can still make a patient feel better, which relates to its origin from the Latin phrase meaning "I shall please." Before its association with medicine, placebo had a long history of meaning "flatterer" or "to flatter."

Anyone who has ever taken a placebo knows that they can make you feel better, in spite of the fact that they typically contain no active ingredients or substances which might have an effect. This may make sense when one considers the etymology of the word; placebo comes from Latin, in which it has the literal meaning of “I shall please.” The medical use of placebo is not the word’s first meaning in English, however, and it took a number of centuries of use before the placebo got around to pleasing people in this manner. 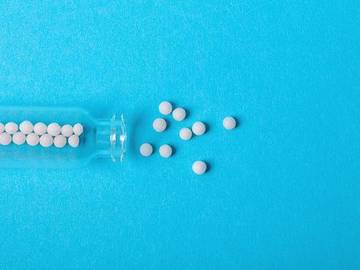 Read two articles and call us in the morning.

First Use of 'Placebo'

The first use of placebo in English came in the 13th century, referring to the vespers for the dead in the Roman Catholic Church. Placebo is the first word in the first line of the first antiphon, Psalms 114:9.

Beginning in the 14th century the word had a bit of a semantic detour, and took on the meanings of “flatterer” and “to flatter” (as a verb it was often used in conjunction with sing or play).

The fourth synne is whan they synge alwaye the placebo of flaterye, That is to say, my lord or my lady ye say trouthe.
— Dominican Laurent, le liure Royal, 1485

Quere 10 … whether they will sing placebo in hope of preferment or not, and whether they will not be willing to become Prebends, Deans and Officialls, as ever before?
— Anon., Queres to be considered of on the kings much wished and hoped for arrivall towards the City of London, 1647

That amongst so many Placeboes (we mean the flatterers of the Court) there was not one that plainly durst condemne the said poore man, that was accused; God ruling their tongues, that sometimes ruled the tongue of Balaam, when gladly he would have cursed Gods people.
— John Knox, The historie of the reformation of the Church of Scotland, 1644

The medical use of placebo (“an inert medicament or preparation given for its psychological effect especially to satisfy the patient or to act as a control in an experimental series”) began to see use in the latter half of the 18th century, although it was not until the 19th century that we have textual evidence of the phrase placebo effect (“improvement in the condition of a patient that occurs in response to treatment but cannot be considered due to the specific treatment used”).

Where a placebo merely is wanted, the purpose may be answered by means, which, although perhaps reduced under the materia medica, do not, however, deserve the name of medicines.
— Andrew Duncan, Elements of Therapeutics, 1770

Those who have no crying need for tonics are improved by their placebo effect and feel that every effort is being made for their relief.
— Terry M. Townsend & Julius Valentine, Medical Record (New York, NY), 27 May 1911

Beginning with a hymnal dirge, and covering such semantic terrain as flattery, flatterers, and things which tend to soothe, placebo is a word of wide-ranging meaning. This cannot be said of its lesser-known cousin, the nocebo, a substance that is similar to the placebo insofar as it contains no active ingredients, but differs insofar as it has the effect of worsening the symptoms of the person to whom it is given. Nocebo is a far more recent addition to English, dating from the middle of the 20th century, and does not appear to have application outside of the realm of medicine. And while it may appear that the word was coined as a pun by some smart-aleck doctor, it has a similar pedigree as placebo, coming from the Latin nocēbō, meaning “I will harm.”