Do pigeons actually live in them? 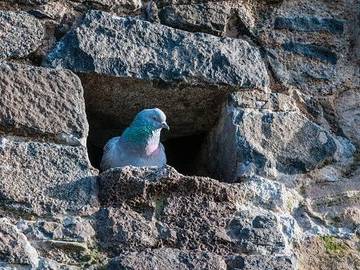 'Peristeronic': of or relating to pigeons

The English language has a rich history of words which came into use with a clear and distinct meaning, only to see that taken over so thoroughly by a figurative one that the first use has faded almost entirely from memory. One such example is debacle, which initially meant “a tumultuous breakup of ice in a river” (the word comes from the French débâcler, meaning “to clear”), and now is typically employed to refer such things as “a great disaster,” “a complete failure,” and “the year 2020.” Another such word is pigeonhole, most often encountered today with the meaning of “to assign to an often restrictive category”; did pigeonhole first refer to holes for pigeons?

A Hole for Pigeons

Yes; we define the first sense of this word as a noun as “a hole or small recess for pigeons to nest,” a use that dates from the latter portion of the 16th century.

Columella affirmeth, that Turtles wyll neyther laye, nor bring foorth in the house, nor Partredges: and therefore they vsed to take them wylde when they were full ripe, and to feede and fat them in little darke roomes like Pigion holes: the olde ones be not so good, as neither the Pigion is.
— Conrad Heresbach, Foure bookes of husbandry, 1577

In the centuries following the noun form of the word took on a number of additional senses, including “an excessively small room,” “a seat in the upper gallery of a theater or in the top row of the gallery,” and “ a small open compartment usually in a desk, case, or cabinet especially for keeping letters or documents.” The last of these featured prominently in the creation of the Oxford English Dictionary, as the editors of the first edition of this dictionary constructed a series of over a thousand pigeonholes, in which they sorted and organized millions of slips of paper, holding the citations that formed the backbone of this great work.

Verb Use of 'Pigeonhole'

Pigeonhole became a verb in the early 19th century, with such meanings as “to place in or as if in the pigeonhole of a desk” and “to make into pigeonholes.”

If the Liturgy could be considered as a country, it is a History of it; and, with regret that Mr. Pruen did not give us more of himself, we readily acknowledge that the labour and perseverance of Mr. Pruen are immense; and that he has shelved, pigeon-holed, and ticketed an enormous mass of multifarious information.
— The Gentleman’s Magazine (London, Eng.), 1 Mar. 1821

The rafters and sashes are of iron; the walls are 9 in. brickwork, ends and front pigeon-holed.
— The Gardener’s Magazine and Register of Rural & Domestic Improvement (London, Eng.), 1831

Above these, he places three courses of __plattings_, the lowest course of which are at every 14 or 15 feet to be pigeon holed across the clamp.
— The Repertory of Patent Inventions, 1825

Additional verb meanings were added as the 19th century progressed. These became increasingly figurative, as with the sense meaning “to put away as if in a place readily accessible or for future reference; to lay aside indefinitely.”

R. J. M. (Hastings, Minn.), obligingly sends the following recipes for the benefit of the Craft. He will perceive that one is omitted: we have pigeon-holed it for future service.
— American Druggists’ Circular and Chemical Gazette (New York, NY), 1 Apr. 1860

It is generally conceded that the application of General Sickles for a court of inquiry, and of Fitz John Porter for a reopening of his case, have been pigeon-holed, where they will sleep the sleep that knows no waking.
— The Philadelphia Inquirer, 12 Oct. 1867

Towards the end of the 19th century pigeonhole began to be used to mean “classify,” a sense which soon took on the meaning commonly found today: “to assign to an often restrictive category.”

We doubt if we pigeon-hole our emotions more than any other people; but we are, perhaps, more careful to pigeon-hole fine meats, rich puddings, and strong drinks in the same hole with mirth, so as to lay our hands easily on both at once.
— The Spectator (London, Eng.), 8 Jan. 1870

Now, to persons whose strongest tendency is, where out of the sphere of pure poetry, to pigeon-hole ideas, and thumb-screw everything till it confesses its justifying secret and its relations to those grand conspiracies of nature that govern us all without our will, there is something tantalizing about this.
— The Contemporary Review (London, Eng.), 1 Apr. 1870

The girl of today refuses to be pigeon-holed into any particular type.
—The Washington Post, 6 Feb. 1927

Although doubtless that literal pigeonholes still exist out there in the world, it is likelier that this word will be found describing classifying someone or something in a restrictive manner. Considering how far the word has strayed from its roots, it seems possible that in another century or so it will have some completely new meaning, one even less peristeronic.