It's not the usual way words get born.

In May 2012, Australia's Macquarie Dictionary and the McCann advertising agency assembled a group of language experts to name a phenomenon common in the era of the smartphone. They dubbed the phenomenon phubbing, and defined it as "the act of snubbing someone in a social setting by looking at your phone instead of paying attention." 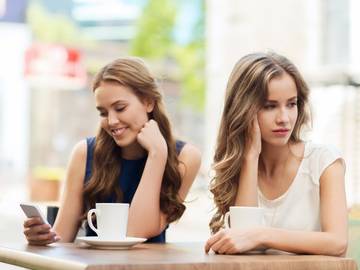 'Phubbing' is the act of snubbing someone in a social setting by looking at your phone instead of paying attention.

A month later, the first example of phubbing in a major newspaper appeared in a letter to the editor of The Age, published in Melbourne.

Since then, the word has appeared in various media the world over. Phubbing has yet to be fully adopted in the U.S., but we have collected some evidence of it in use:

In the present case, phubbing is a splicing together of the words phone and snubbing. To be phubbed is to be snubbed by someone using their cell phone while in your company. The "phubb" could be an interruption of your conversation with someone when he or she uses their cell phone or is distracted by it (furtive glances when they think you're not looking) instead of paying attention to you. Maybe worse, you've been phubbed if someone used their cell phone instead of communicating with you while in close proximity to you. Oh, the shame.
— James A. Roberts, The Huffington Post, 29 September 2015

The meaning and various forms of the word have yet to settle out. Is it phubbing if you're staring at the your tablet instead of your phone? Is the singular noun (and the base form of the verb) spelled phubb, as in the example above, or phub, as in some other sources?

These are the sorts of questions we'll need answers to before we're ready to consider phubbing and its relations for entry. In the meanwhile you can of course use phubbing if you feel the need. It seems we all do these days.