Speaking of flowers and bicycles and wares.

Petal, pedal, and peddle are similar in sound but distinct in meaning. Petal refers to the leaf of a flower. Pedal is a noun referring to any of various levers activated by the foot. Peddle is a verb related to traveling around and selling goods. 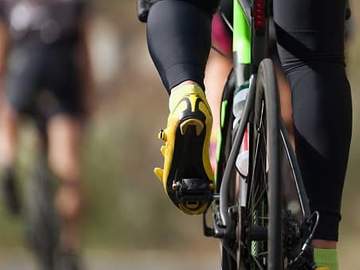 Petal, pedal, and peddle are three words that sound very much alike and so can be easily confused. Pedal and peddle, in fact, are homophones, and petal is close.

The noun petal refers to one of the brightly colored leaves that make up the corolla of a flower.

Want something to make your neighbors peer over the fence with amazement? Cactus-flowered zinnias have beautiful twisted or curved petals that come in several bright colors.
— Lynn Coulter, Better Homes & Gardens, 26 Apr. 2021

Two hundred twenty formally clad guests gathered on the manicured lawn of the Rosewood Miramar Beach Hotel, which overlooks the Santa Barbara Channel. Pink and white rose petals were strewn everywhere as a violinist drew her bow and commenced the ceremony with the opening notes of Céline Dion’s “Because You Loved Me.”
— James Reginato, Town & Country, 14 Jan. 2020

Pedal refers to any of various levers activated by the foot. It can be found on a bicycle, or in your car (the accelerator, brake, and clutch pedals). Pedals are often used to modify the sound of a number of musical instruments, including the piano and the electric guitar.

The Latin adjective pedalis means "relating to the foot."

If you do encounter sand or ice, level your pedals, point your bike straight ahead, relax your upper body, and exhale as you cross.
— Brian Fiske, Bicycling, March 2008

Launched in 1978, the Boss DS-1 remains the longest production-run guitar pedal in history, and one of the best-selling, too.
— Sam Roche, Guitar World, 28 Apr. 2021

Pedal can also be a verb meaning to operate something with a pedal, or more broadly, to ride a bicycle.

Mark Rasch hopped on his bike Tuesday in Bethesda, Md., pedaled off for an afternoon ride, and realized he forgot his mask.
— Matt Richtel, The New York Times, 29 Apr. 2021

Pedal also is a component of the verb backpedal, meaning "to retreat or move backward," whether literally or figuratively.

Shortstop Tim Anderson originally backpedaled in an attempt to make the catch, but Robert ran 134 feet from his spot in the outfield, appearing to call Anderson off and getting in position to make the routine play.
— Rhett Bollinger, MLB.com, 4 Apr. 2021

Mayoral candidate Andrew Yang backpedaled on Monday after kicking up a controversy with a tweet seemingly calling for a crackdown on unlicensed street vendors, saying that he doesn’t want to punish vendors and that he picked a poor platform to address a complex topic.
— Tim Balk, The New York Daily News, 12 Apr. 2021

The term pedal boat refers to a boat powered by pedals. This is sometime conflated with paddleboat, which is propelled by a paddle wheel. Complicating the matter is the fact that, in some instances, the paddle wheel on a paddleboat is operated by pedals, making both terms correct.

Peddle is a verb meaning to travel around and offer goods for sale, sometimes illegally or dishonestly. A person who does this is a peddler. Peddle can also mean to deal out or disseminate something that is not a physical good, such as advice or disinformation.

“I encourage them to continue to report drug activity in their neighborhoods; on their streets,” Bracy stressed. “That info helps us build our cases and upon arrest it removes those drugs and that dealer from peddling narcotics in our town and in our county. These arrests keep drugs out of the hands of our children.”
— Cal Bryant, The Roanoke-Chowan News Herald, 22 Apr. 2021

Some have begun walking back the nonsense -- Fox News' John Roberts conceded on the air yesterday that it is "not the case" that Biden's climate plan is targeting meat consumption -- but many of the others who've peddled the claim have made little effort to acknowledge reality.
— Steve Benen, MSNBC.com, 27 Apr. 2021

Of petal, pedal, and peddle, the latter two are more likely to be confused for one another, particularly when they are used as verbs. It is possible to both pedal and peddle a bicycle, for example—but make sure your customer has paid before pedaling away.