Taking a Walk with 'Pedestrian'

There's nothing dull about a good stroll, is there?

Pedestrian comes from the Latin for "foot" and still refers to those who walk or travel by foot. In its early usage it was contrasted with equestrian, which refers to those traveling by horse. Perhaps because walking is less exciting than riding, eventually pedestrian also became a synonym for dull or unimaginative. 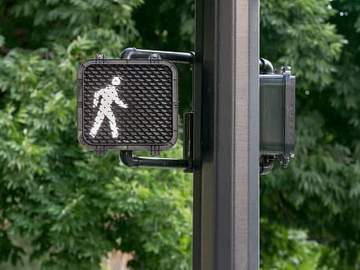 Look both ways before you write.

There's nothing like a good, long walk to get the blood flowing. We use the noun pedestrian to refer to a person traveling on foot, usually in contrast to someone traveling by some other way (bicycle, carriage, motorcar, etc.). It can also be an adjective that describes something meant for people walking on foot ("a pedestrian bridge" or "a pedestrian tour").

The rules are part of the city's attempts to cope with the rapid influx of scooters that have proven wildly popular but also raised safety concerns as they zip around at 20 mph, weaving between pedestrians or darting into traffic.
— Ely Portillo, The Charlotte Observer, 7 Jan. 2019

They hope to construct a $1.2 million pedestrian tunnel under Fulton Drive NW between the high school and North Park, with lots of activities happening on both sides of the busy roadway there.
— Jim Michaels, WHBC.com, 18 Dec. 2020

After a brief rest at Hamburg, we made preparations for a long pedestrian trip southward in the soft spring weather, but at the last moment we changed the program, for private reasons, and took the express-train.
— Mark Twain, A Tramp Abroad, 1880

The Origin of 'Pedestrian'

The Latin pedester means "going on foot" and derives from the noun for "foot," which is pes. A pedometer measures your steps; a pedal is operated by the foot; a biped is a creature with two feet and a quadruped is one with four.

In early use, pedestrians were contrasted with equestrians—those who traveled on horseback.

Although accounted complete in all the exercises of chivalry, and possessed of much of the character of what was then termed a perfect knight, the person of the Count was far from being a model of romantic beauty. He was under the common size, though very strongly built, and his legs rather curved outwards, into that make which is more convenient for horseback, than elegant in a pedestrian. — Sir Walter Scott, Quentin Durward, 1823

In the 18th century, pedestrian described a type of statue—one that depicted a person (such as a soldier) standing on foot, as opposed to one mounted on a horse, which was also known as equestrian.

Directly in front of Sir Walter's pillar, opposite the new Post Office, is a pedestrian statue in bronze, by Flaxman, of Sir John Moore, who was born in Glasgow in 1761.
— Adam Black, Black's Picturesque Tourist of Scotland, 1865

'Pedestrian' as an Adjective

Pedestrian has another sense in English, as an adjective meaning "dull" or "commonplace."

Anyway, I find our country’s New Year traditions rather pedestrian. More interesting are certain customs popular south of our border or across the big pond. Some folks in Brazil and Mexico celebrate the New Year by wearing red undergarments for good fortune in love and yellow undies in hopes of increased wealth.
— Shirley Scott, The Urbana Daily Citizen, 12 Jan. 2021

Those picks, and the decisions that go with them, are under more scrutiny after the Dallas Cowboys’ quarterback followed his remarkable rookie season with a somewhat pedestrian encore. And Prescott is among those doing the scrutinizing — each night at camp in the film room.
— Schuyler Dixon, Associated Press, 6 Aug. 2018

Leaving that aside, [Gone With the Wind] at the very least it is an overrated movie, highlighted by a few extraordinary scenes -- thousands of wounded soldiers, laid out row on row forever; a horse-drawn carriage silhouetted by consuming flames; some bloody, expressionistic skies. But most of the cinematography is pedestrian. Many scenes are ridiculously overlit -- no doubt because Technicolor was still a glorious new gimmick in 1939.
— Philip Martin, The Arkansas Democrat-Gazette, 8 Jan. 2021

When describing language or prose, pedestrian is used for words that are simple to understand and not flashy or ornate. In some cases, but not all, this is leveled as a criticism, much in the way that prosaic, a word meant to describe prose writing as compared to poetry, can similarly mean "dull or unimaginative" or "everyday or ordinary" (as in "prosaic experiences"). There are some instances when unflashy language is desired.

Last year, Washington made a literary splash with the publication of his short-story collection, Lot, a radical, multidimensional examination of the lives of everyday Houston citizens that went well beyond the white, straight, cowboy demographic most readers commonly associate with Texas. Washington, instead, tackled race, queerness, poverty, crime, gentrification, and the difficult bonds of friends and family. Moreover, his stories came wrapped in a fast, pedestrian prose style all his own, one that eschews ornate flourishes and meaty metaphors for a tough, off-the-cuff intimacy that cuts and flows like the Houston heat.
— Christopher Bollen, Interview, 27 Oct. 2020

After federal officials gave lawmakers a briefing on Thursday, a frustrated Rep. Anna Eshoo, D-Calif., told me: “Everything was wrapped in confusion. The only one who answers the questions — he not only gives the science, but then he says, let me explain this in pedestrian language — is Dr. Fauci.”
— Karen Tumulty, The Washington Post, 14 Mar. 2020

So what happened to pedestrian to cause it to mean "dull" or "unimaginative?" There's the notion of speed, for one thing: pedestrians certainly move more slowly than someone or a horse or in a chariot (a riding experience that might get the heart racing). Yet some might argue that taking a slower pace might be more enjoyable—even more exciting—than those faster transports. It depends, we suppose, on where the road takes you. Look both ways when you cross.