Bring on the think pieces.

We are always striving for the peak. The peak of the mountain is the point at which the climber can go no higher. One is most successful at the peak of one's career, but a fad that has peaked will never reclaim that level of popularity. 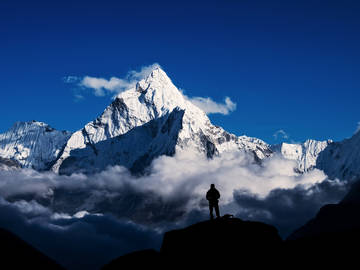 Adjectival use of 'peak' originated with the phrase 'peak oil.'

Like mountains, line graphs have peaks, the point at which the highest number or level is attained, whether that refers to profit margins, opinion polls, or blood pressure. Hairstyles can have peaks, as can bowls of whipped cream.

Peak can also be an adjective. It can mean "at or reaching the maximum":

Peak levels of ozone, the most dangerous pollutant, have dropped in Los Angeles to a quarter of what they were in 1955, despite huge increases in population and traffic.
— Robert Reinhold, The New York Times, 26 Nov. 1992

Peak can also mean "of, relating to, or being a period of maximum intensity or activity":

During peak hours on weekdays, it is a 15-minute wait for one of the Staten Island ferries to heave into the terminal.
— N. R. Kleinfield, The New York Times, 19 Sept. 2003

The Clintons made an O.T.R. ("on the run") visit to the Hamptons at peak lemming season.
— Gail Sheehy, Vanity Fair, February 1999

Adjectival use of peak to refer to situations that have reached maximum capacity have an originating model in peak oil, a term coined in 1956 by geoscientist Marion King Hubbert. In a paper presented to the American Petroleum Institute, Hubbert employed the term as part of a projection of U.S. petroleum production, estimating that the maximum potential production would top off sometime between 1965 and 1975 at roughly 2.5 billion to 3 billion barrels per year. Production would then decline irreversibly in the following decades as reserves dried up. (Indeed, the year 1970 ended up being the highest year for oil production in the U.S. in the pre-fracking era.) Use of peak in this manner highlights the stress placed on a finite reserve of something.

Nowadays, when we seek peak in front of a noun, it's often describing something that has become such a popular trend as to be ridiculous, likely never to be surpassed. There's often a tinge of exasperation in describing things as peak, suggesting that, like peak oil, the well of creativity surrounding the trend has run dry:

So where does that leave you and your obsessive avocado habit? If we've indeed reached "Peak Avocado," then the trend lines are heading in an unpalatable direction. Climate change, fungus, drought, and crime, don't spell a bountiful future for the green fruit...
— National Geographic, 5 May 2015

When HBO canceled Togetherness, the weird, uncomfortable, emotionally in-tune series from brothers Mark and Jay Duplass, after just two seasons, I was distraught. Just as “peak TV” means more and more quality shows to check out, so too does the churn of content, and the shifting nature of viewership, bring about the cancelations of shows that deserve more time to explore their creative visions.
— Kyle Fowle, Paste.com, 27 July 2017

We are now at peak app. It’s no longer a land grab of virgin territory, it’s a time where new apps most likely require the deletion of an incumbent.
— Tom Goodwin, Forbes.com, 8 July 2016

In case you missed it, we have arrived at Peak Officiating Complaint Time in the sport. Refs are overworked and missing calls. Coaches and fans and players (hi, Grayson Allen) are losing their minds.
— Pat Forde, Yahoo! Sports, 23 Feb. 2016

While the planet could theoretically run out of avocados and TV episodes (not so much apps or complaints to sports officials), this use strips peak of its attachment to finite resources. Now peak has become so popular as a way to express one's dismay with the oversaturation of any subject, from food trends to internet memes, in the mass media, that some commentators have even wondered in the use of peak itself has peaked:

After Australian researchers announced in April this year that the world had attained "peak beard", a resource not supposed to be finite, other peaks followed. There were peak suburbs, peak hipsters, peak travel, peak narcissism and peak Beyoncé. There have been countless food peaks: banana, bacon, burgers, ramen, burrito and Freans (too many biscuits).
— Paula Cocozza, The Guardian, 27 Aug. 2014

Whether peak has really peaked, or still has room for even greater popularity, remains to be seen. After all, you don't know if you've reached the peak of the mountain until you can't go any higher.