You aren't prepared for this word's origin

Modern parades can be small affairs with little preparation. Participants need only show up and latecomers can jump in at any point. 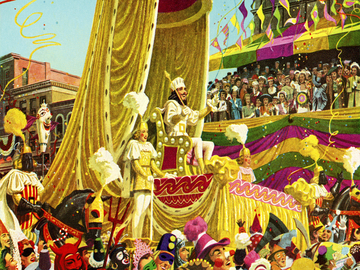 "Parade" comes to English from French and used to refer to a "pompous show" rather than a public procession.

Other parades require months of preparation and involve multiple committees, the tireless efforts of hundreds of people, miles of crowd-lined streets, and giant floating balloon creatures taller than many buildings.

As a proud resident of Baton Rouge's venerable, eclectic, delightfully wacky Spanish Town neighborhood, I can report that Saturday's Mardi Gras parade was conducted with quiet dignity and a sober demeanor among its participants. Nah, just kidding…
— Smiley Anders, The Advocate, 23 Feb. 2020

Where "Parade" Comes From

Both kinds are typically celebratory, but parades can also be sober or even somber events. The word parade itself has little that's celebratory about it. It comes to English from French, where it traces back to a Middle French word meaning "to prepare."

And the original English-language parades did indeed require preparation. When the English started using the word parade in the mid-1600s it referred—as it did and does in French—to a pompous show, an exhibition. (The French have continued to use the word that gave us parade to refer to a pompous show. For public processions they use défilé.) The use was still common in the 19th century:

Emma watched and decided, that with such feelings as were now shewn, it could not be fairly supposed that he had been ever voluntarily absenting himself; that he had not been acting a part, or making a parade of insincere professions….
— Jane Austen, Emma, 1815

He paid his tradesmen punctually, and never met the squire of Caversham without seeming to make a parade of his virtue in that direction.
— Anthony Trollope, The Way We Live Now, 1875

Other Uses of Parade

That meaning of the word doesn't get much use these days, but another 17th century meaning is still in current (albeit infrequent) use: parade as referring to the ceremonial formation of a body of troops before a superior officer, as in this 19th century example:

The consequence was, that the Major appeared on parade quite trim, fresh, and alert, his well-shaved rosy countenance, as he sate on horseback, giving cheerfulness and confidence to the whole corps.
— William Makepeace Thackeray, Vanity Fair, 1847-48

The youth thought of the village street at home before the arrival of the circus parade on a day in the spring. He remembered how he had stood, a small thrillful boy, prepared to follow the dingy lady upon the white horse, or the band in its faded chariot.
— Stephen Crane, The Red Badge of Courage, 1895

Along the way and over the years, parade also developed the meaning of "a long series of people or things that come one after the other," as in "a parade of visitors"; that use dates to the late 1700s, which makes it only slightly newer than the verb parade—as in "show-offs parading up and down the sidewalk"—which dates to the mid-1700s. Several other meanings of the word exist as well, which you can see at the word's entry.

We hope the parades you see are mostly of the celebratory variety—and that they involve less of the dingy and faded than Stephen Crane's.