The History of 'Pants'

The word's origins are rooted in comedy

In US English, the word pants isn't a particularly funny one. It's the most common term for that very common piece of clothing that covers the body from the waist to the ankle (give or take), with a separate part for each leg.

But the word pants is rooted in comedy. 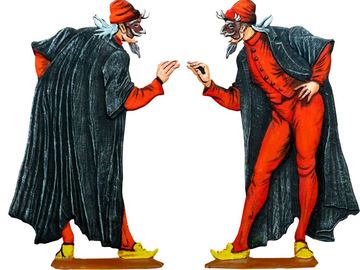 Image of Pantalone. The word 'pants' comes to us from an Anglicization of the character's name, "Pantaloon."

The word comes from the name of a stock figure in the commedia dell’arte, a form of Italian comic theater popular throughout Europe from about the 16th to the mid-18th century. Pantalone, as he was called, was a greedy, lecherous, scheming old man who often ended up being duped and humiliated. His costume consisted of a soft brimless hat; a pleated black cassock (typically worn open); slippers; and a vest, breeches, and stockings that were conspicuously red and tight-fitting. In later representations of the character, the breeches and stockings were replaced by long trousers.

When trousers of a similar style became popular during the Restoration in England, they became known as pantaloons, Pantaloon being an Anglicization of Pantalone. Fashions changed over the years, but pantaloons continued to be the word used to refer to various types of trousers. Americans clipped the term to pants in the early 19th century, and that shorter word became a standard term for the garment, serving also as the basis for new formations denoting new garments, such as underpants and panties.

Harmless enough to our ears, the shortened form pants alone was considered vulgar by some language commentators for quite some time, including Ambrose Bierce, who wrote the following in his 1909 book Write It Right about pants for trousers: "Abbreviated from pantaloons, which are no longer worn. Vulgar exceedingly."

We don't know that the "vulgar exceedingly" characterization had anything to do with another use of pants or not, but in the late 19th and early 20th centuries, pants appeared in an insulting assertion about a person's name: to say that someone's name was pants meant to say that you didn't like or trust that person, much like in the still-used expression "your name is mud."

And in the 20th century, the word began to appear in the phrase "with one's pants down," meaning "in an embarrassing position (as of being unprepared to act)."

Pants by itself has of course continued in US English to refer to trousers, but in British English, pants is used most often to refer to what Americans call underpants—which, makes the word a good bit funnier across the pond, at least for 8-year-olds and anyone who shares their sense of humor.

And the British have taken the humor to another level: since the 1990s, British English speakers have also used pants informally to mean "nonsense," as in "It's ridiculous; the whole thing is pants" or "The whole thing is a pile of pants."

Clearly there's too much history about the word pants for anyone to declare it itself pants.