The Difference Between ‘Osculate’ and ‘Oscillate’

Or, watch your tongue when you’re near the fan. 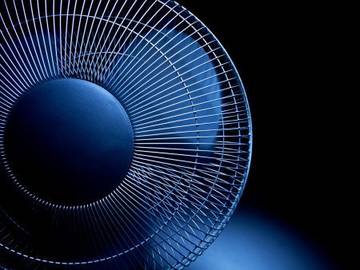 We could go back and forth about it.

Only a couple of letters separate osculate and oscillate, two verbs with very different meanings. Whether or not you’re liable to confuse them depends, for starters, on how firmly each is established in your vocabulary.

Osculate turns up mostly in humorous contexts as a fancy word meaning “to kiss.” The Latin noun for “kiss,” osculum, is also the diminutive of the Latin noun os, meaning “mouth.” Our adjective oral also comes from this root.

Osculate (or its related noun osculation) might be used as an alternative to kiss to avoid repeating the latter word, or to bring an ironically clinical connotation to a common action for which slangier alternatives like smooch exist.

The episode tracing Maya’s discovery of onanism is superb for conjuring the first stirrings of horniness with both gross humor and fine sensitivity. The depictions of make-out sessions, with actors seeming to osculate the lens, offer a clinical perspective.
— Troy Patterson, The New Yorker, 8 Feb. 2019

“Electric Kiss” (2008) is a walk-in hut shaped like a Hershey’s Kiss made of half-round, colored acrylic ribs tied to a steel frame. It gleams and sparkles in the sunlight and invites lovers to enter and osculate.
— Ken Johnson, The New York Times, 8 July 2016

A priest was expected to kiss the missal's image of Christ on the cross, but repeated kissing harmed the painting, so artists occasionally provided at the base of a miniature a smaller crucifix, designed to withstand osculation.
— Israel Shenker, The New Yorker, 29 May 1989

A lesser-known use of osculate is found in contexts pertaining to geometry. A pair of curves or surfaces osculate when they have a common tangent at the point of contact. A circle that is tangent to a curve at a given point is termed an osculating circle.

What Does 'Oscillate' Mean?

The verb oscillate means to move back and forth. Its most common use might be in its participial adjective form oscillating, which describes something with a part that moves back and forth often at timed intervals. An oscillating fan has a head that swivels as it blows air; an oscillating sprinkler sends water in a range of directions.

Hoenselaar built a prototype of what would become the first spiral ham slicer in 1936 and patented the device in 1944, according to Honey Baked Ham's website. It cuts hams individually to the bone with an oscillating blade.
— Kurt Nagl, Crain’s Detroit Business _, 19 Apr. 2019 Unrelated to _osculate, oscillate derives from the past participle of the Latin verb oscillare, meaning “to swing.”

Other things that oscillate include pendulums, cables, and brain waves:

As long as Earth's mass distribution is unbalanced--as long as its axis of symmetry is tipped away from its spin axis--it will tend to wobble on a 14-month cycle, the way the pendulum of a grandfather clock naturally oscillates on its own cycle of, say, one second.
— Shawna Vogel, Discover, August 1989

When the first wire snapped it went like a guitar string, the two-inch steel cable quivering faster and faster until it oscillated at a thousand cycles a second and then just flew apart, one end flailing over the ice water toward Terror
— David R. Masiel, 2182 KHZ, 2002

When people consume the compound, their brains produce waves oscillating at between 8 and 13 cycles per second, a range of frequencies called the alpha band, which is prominent during relaxed but focused concentration.
— Carl Zimmer, Discover, July/August, 2012

Figuratively, one can oscillate between two moods, opinions, or points, often with each marking the end of a range. In this use, oscillate is a synonym of waver or alternate:

Most novels are narrated in the past tense, some in the present tense, but a few, like The Constant Gardener, oscillate between the two.
— John Mullan, How Novels Work, 2006

This first version of Montaigne's book was quite different from the one usually read now. It filled only two fairly small volumes … most chapters remained relatively simple. They often oscillated between rival points of view, but they did not wash around like vast turbulent rivers or fan out into deltas, as later essays did.
— Sarah Bakewell, How to Live, 2010